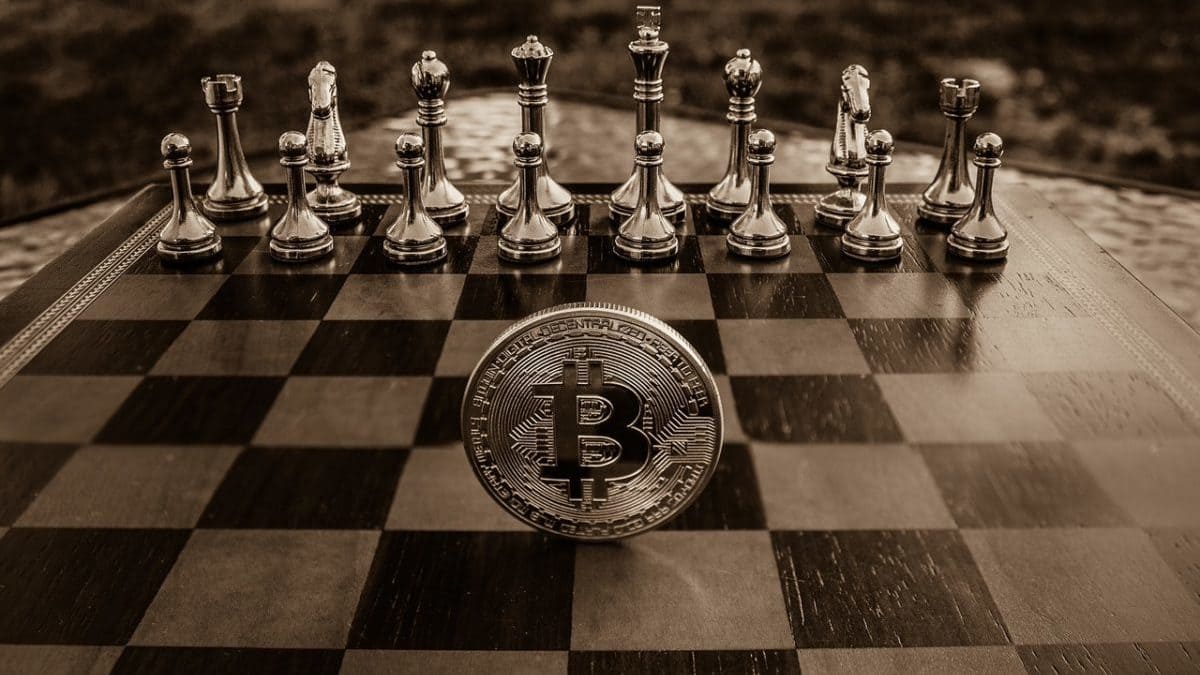 On-chain market intelligence platform, Glassnode, in its recent study assessed the balance between Bitcoin (BTC) buyers and sellers in order to measure a possible way to check how to end the current bear market. 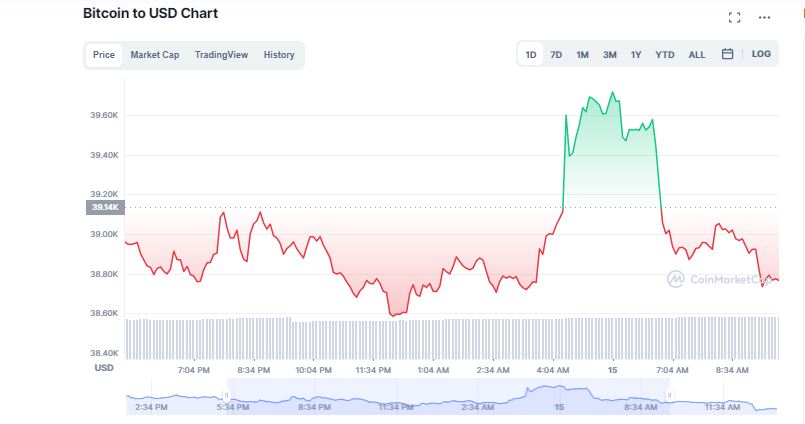 HodLing Is The Most Preferred Strategy 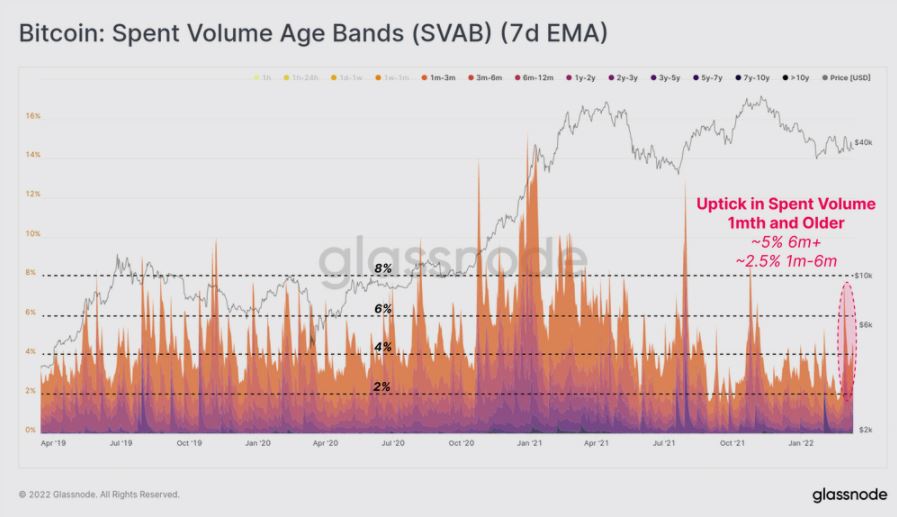 According to the latest study by Glassnode, older coins are being spent at higher levels. This indicates a more bearish tilt in sentiment within the HODLer class. Coins older than 6 months represented 5% of all spending volume this week, which is a notable uptick from recent months. Although long-term coin selling has increased, HODLing is still the preferred strategy as more of the short-term supply is becoming long-term supply.

The Russia-Ukraine war along with US Fed’s upcoming monetary policy meeting have likely precipitated the increase in the sell-offs last week by long-term holders and shaken some short-term holders out of their positions. Short-term holders (STH) who have held coins for less than 155 days continue to decline in number.

Glassnode suggests that while it is generally more common for Short-term holders to sell, the recent decline in STH supply “can only occur when large portions of the coin supply are dormant and crossing the 155-day age threshold, becoming Long-Term Holder supply.” It has emphasized that STH supply reaching low levels is historically associated with the later stages of bear markets, as patient buyers send coins to cold storage for the long hold. 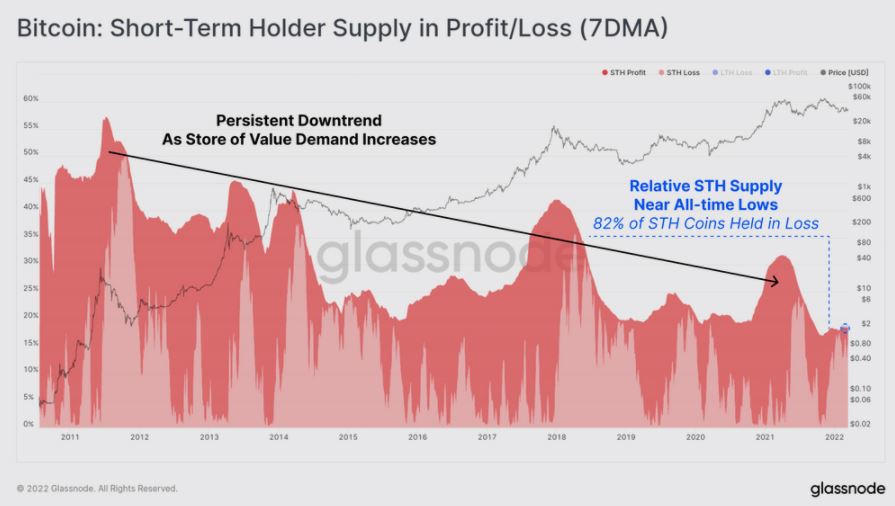 Bitcoin Is One Of The Most Modern Asset Class

The analytical firm noted that late stage bear markets are characterized by lower proportions of capital held by these younger coins, as coins mature in longer-term investor wallets. The sell-offs have been into a relatively strong market that has avoided any significant moves up or down and has remained range-bound for most of this year.

This is thought to be staving off a capitulation event which often comes at the end of a bear cycle. Capitulation events often signify a complete and total flush out of all remaining sellers, turning the tides in the favor of the bulls. 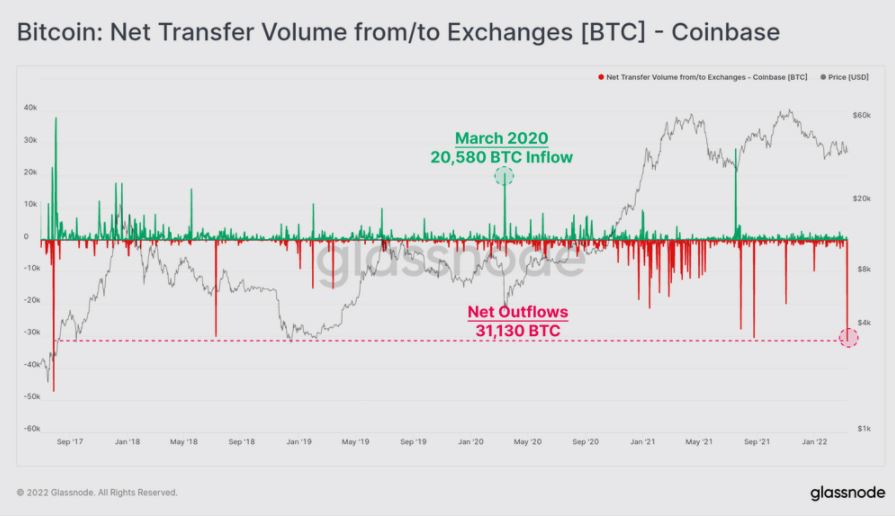 Glassnode has detailed in the report that one of the leading crypto exchanges, Coinbase, has witnessed a large net outflow this week, totalling 31,130 BTC ($1.18B) signaling the largest net outflow since 28-July-2017. This remains a strong signal that investors increasingly see Bitcoin as a relevant asset in modern portfolios.