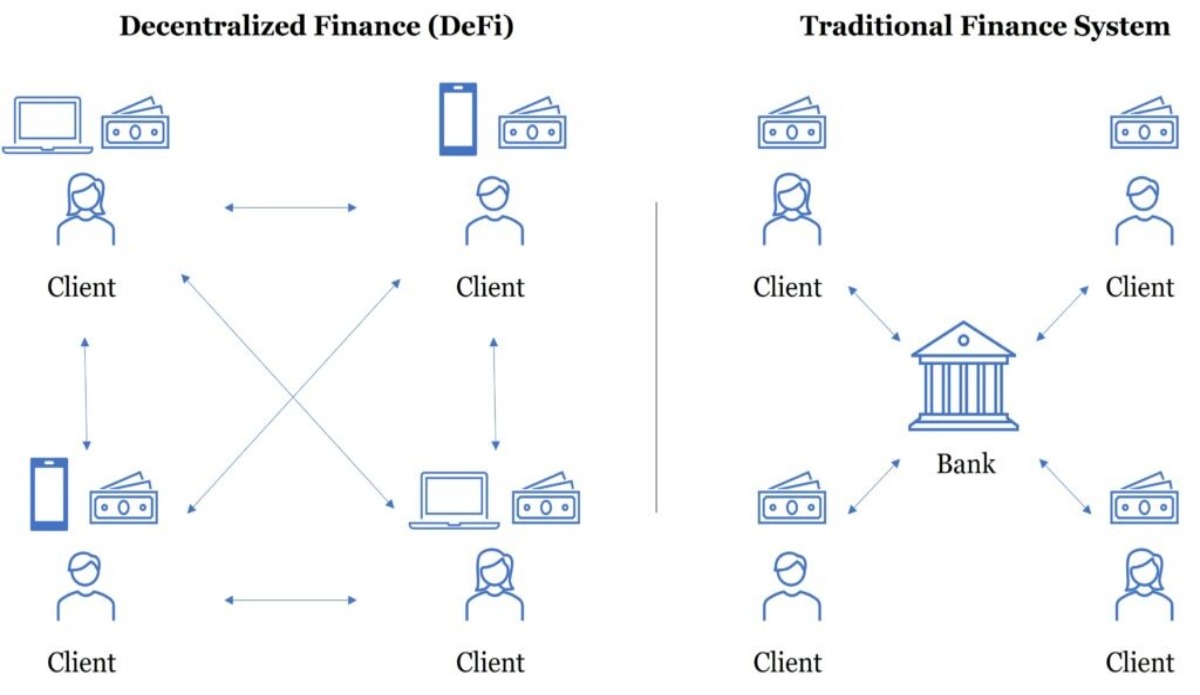 Web3 emerged with great features that entice its clear exponential growth. The adoption rate of web3 is growing, and every existing and new startup is looking to build their business on or adopt web3 technologies.

Businesses transacted through the traditional finance system before the emergence of the web3. Traditional finance is a centralized system controlled by the government, sole proprietorships, and a single individual laydown system. You only have the power to your ownership, but the authorities in charge control the system.

DeFi is a finance system with an open end-to-end financial service that runs on a decentralized system called Blockchain. This means you can create a financial product that provides available financial information and services that works on the blockchain network.

DeFi gives a decentralized finance governing system where it also serves as a financial transaction intermediary like a traditional bank but not in a centralized system that has been the adapted system for decades.

DeFi works with the decentralized protocol of the Blockchain. This system has also made it easy for equality promotion where anybody with an internet connection can transact easily with no natural restrictions on the Blockchain.

According to the world bank: “Globally, 1.7 billion adults remain unbanked, yet two-thirds of them own a mobile phone that could help them access financial services.”

Imagine this from the adult side, not to talk of teen and young builders who need to transact but have been held down due to the restrictions. But with the help of DeFi, equality is promoted, which makes it easy for anyone to enjoy the full fledge internet decentralized financial banking system.

The traditional financial system is run by banks and financial institutions, which serves as the main operation protocol for various financial operations. The TradFi system works on a centralized platform, controlled by government agencies and intermediaries of all kinds

You probably would have at least one, two, or more bank accounts which gave you access to be entitled to some financial services like fund transactions, credit card payments, ATM withdrawals, etc. It’s rarely possible to not see a bank in any region of the globe; this system has been the first adopted for financial welfare. But every single one of these banks works with the centralized system, which gives you less control ability.

Comparison between DeFi and TradFi

DeFi is built to ensure an unlimited and timeless flow of financial transactions and fund movement, making it more efficient than our well-known traditional system.

With the traditional system, banking institutions serve a crucial role as an intermediary between two parties trying to transact. Still, with DeFi, there are no intermediaries involved or third-party interference, so DeFi has made it possible for two users or parties to transact with each other on a peer-to-peer system.

The awaited open-ended, secured and transparent financial system is among the key difference between decentralized finance and traditional finance. The blockchain network in which the decentralized system works is transparent and secured with immutable attributes. This means nothing can be done only with the owner’s permission, unlike the traditional system with less security and many unclear transactions registered.

It’s easy to corrupt and breach through a traditional finance system, but it’s not for a decentralized system. According to Fortunly: “The cost of cyberattacks in the banking industry reached $18.3 million annually per company”. And this has only been possible through the centralized system of finance.

Also, with the 2008 Financial Crisis, many people lost their fortunes due to the down crash of many banks. But the decentralized system has set a face-off for any unforeseen circumstances or any future crisis because it’s decentralized.

DeFi has been an alternative to traditional finance because it made it possible for users to be less concerned about today’s financial bureaucracy, which has been a heavy burden and big restrictions of today’s financial system. With decentralized digital ledger technologies, users have gained full control of their fortunes, assets, and financial data with fully secured transaction activities.

DeFi is also built of open-source code. With interactive developer options, developers can now use these tools to build and experiment with decentralized finance and enhance their productivity. Developers don’t need to worry about the restrictions they’ve been trying to implement in traditional settings. They will also give them full knowledge of executing flexible financial products and maintenance.

The decentralized finance system (DeFi) is still in the early stage. It will soon gain a global presence that every business wants to adopt and use this digital ledger technology. DeFi has the ultimate potential to bring a revolution to the financial market, and it will make it will full security and personalized system.

With an online presence and internet connection, you can also use this decentralized finance system anywhere, no matter who you’re.