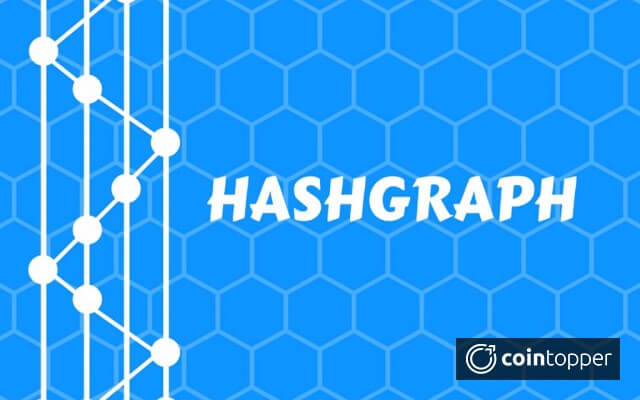 On September 17, a public beta test was launched for the Hedera Hashgraph network, a distributed registry with a declared throughput of 10,000 transactions per second.

The platform also launched its own HBAR token, a service for smart contracts and file storage, and three dozen applications already operate on its basis. How is the new Hedera Hashgraph platform arranged, what is its difference from the blockchain and whether it will have the strength to take its place in the cryptocurrency market.

What is a hash graph?

DAG on the basis of an act such cryptocurrency like IOTA, Byteball and Tangle. Thanks to DAG, the hashgraph promises all the advantages of the blockchain, but without its drawback in the form of a low transaction speed.

In its most general form, a hashgraph works as follows :

This is called a hashgraph – a record of the order of all transactions. In a hash graph, each node knows the entire history of transactions, therefore, to achieve consensus, they use “virtual voting” – you do not need to coordinate all the nodes with each other: each of them already knows how the other will “vote”.

Reliability of the algorithm is mathematically described as asynchronous Byzantine error tolerance (ABFT). Simply put, it is very difficult (almost impossible) to crack, and in order to influence the network, the consent of more than two-thirds of the participants would be required.

How is a hashgraph different from a blockchain?

The hashgraph, like the blockchain, uses distributed computing to create new elements of the system, decentralized data storage, hashing and other functions. It can also be used for settlements, payments and transfers, launching smart contracts and storing files. But it has a number of advantages over the blockchain:

Thanks to its high performance, the hash graph is ideal for solving commercial problems, micropayments, online games, and decentralized financial markets.

Hedera Hashgraph: who is behind the project and what are its goals?

The hash algorithm was developed and patented in 2016 by the American mathematician Lemon Baird. Algorithm rights are held by Swirlds, co-founded and developed by Baird.

Hedera Hashgraph is a public platform of Baird's patented hashgraph. From March to August 2018, the project was conducted by ICO, raising $ 124 million. Closed testing of the network began in December 2018. The code was checked by several audit companies, but only now the developers have begun public testing.

In order not to lose control over the network, the company launched a consensual mechanism: Governing Council (Hedera Governing Council), which determines the development of the project. Board members are chosen by the Swirds leadership. Each company has one vote, regardless of its investments – the developers believe that this will prevent the member companies of the council from agreeing with each other.

According to the charter, a maximum of 39 members can be on the board, but companies must change every couple of years. Now the management board includes 11 companies: Boeing, IBM, DLA Piper, FIS Global, Magazine Luiza, Nomura Holdings, Tata Communications, Deutsche Telekom, T-Labs, Swisscom Blockchain and Swirlds.

Hedera Hashgraph currently offers three products: cryptocurrency , smart contracts and file service. Any user can create an account on the network, open an account or create dApp based on Hedera Hashgraph, having passed the KYC test.

HBAR , the cryptocurrency of the project, is used to pay for network services (launching a smart contract, file storage or transaction fee), dApps, building peer-to-peer payment and micropayment business models, and also to protect the network from intruders. At the start, they offered $ 0.36 for the token, but by September 23, the price dropped to $ 0.03. The coin is now available on 14 cryptocurrency exchanges such as Bittrex, Galaxy Digital, Liquid, OkCoin, OKEx, and Upbit, among others.

At the same time, Hedera Hashgraph warned that the US Securities and Exchange Commission (SEC) might consider HBAR to be a security, however, according to the company, HBAR is not a security. The token does not yet support any hardware wallet – the company is actively working on integrating HBAR with the Ledger Nano S wallet.

A total of 50 billion HBARs have been issued. The first coins worth more than $ 379 million went to ICO-investors of the project, who participated in the $ 124 million token sale. Another $ 1.95 million to HBAR went to consultants, sellers and other network participants. The governing council will issue the remaining coins to the market within 15 years.

As for the Hedera Hashgraph platform, it is compatible with the Solidity programming language and Ethereum smart contracts – any smart contract developed for Ethereum can be transferred to Hedera and restarted on a faster network. But although any user can create smart contracts and applications for the platform, only members of the governing board have the right to run distributed nodes, manage the consensus mechanism (PoS) and support the network.

The beta version is launched with 13 nodes of the main network, managed by the board. Developers can also run mirror nodes , which are public records of all agreed-upon solutions on the network. Gradually, Hedera Hashgraph will allow nodes to run any user.

Also, 32 dApps are already running on the platform. Among them:

Beta testing will last until the beginning of next year, after which the developers will publish the source code. Later, the company plans to increase network performance, provide access to other platform features (for example, the Hedera Consensus API service) and attract new members to the management board (including blue chips).

Opinions about the prospects of the hashgraph and Hedera Hashgraph are opposite. Some experts predict technologies to become the killer of the blockchain and make mankind happy, providing a technological breakthrough.

Here is what a hash graph can bring :

However, according to another point of view, the hashgraph does not bring anything fundamentally new: it is simply a more advanced version of the blockchain that will coexist in parallel with the more obsolete ones.

The prospects of Hedera Hashgraph seem tempting, but so far the system has not been studied, and the applications on it have just started. For 10 years, even the already familiar blockchain has not found mass application.

Belief in Hedera Hashgraph of large companies suggests that it should be taken as seriously as possible – this is not just another scam. But the business has been investing in blockchain projects for several years just in case. We constantly hear about new partnerships and investments, but most of these projects are not implemented, and their tokens are not growing in price.

Of course, a hashgraph will not kill the blockchain. New cryptocurrencies do not kill bitcoin – why is another distributed registry supposed to kill blockchain? After all, not only speed is important, but also the history of the project, its popularity, community and infrastructure. In any case, the potential advantages of the hash graph make it a very interesting project, which is worth watching carefully. After all, if Hedera Hashgraph is the future, then it would be a shame to miss it.

Publication date 09/26/2019
Share this material on social networks and leave your opinion in the comments below.