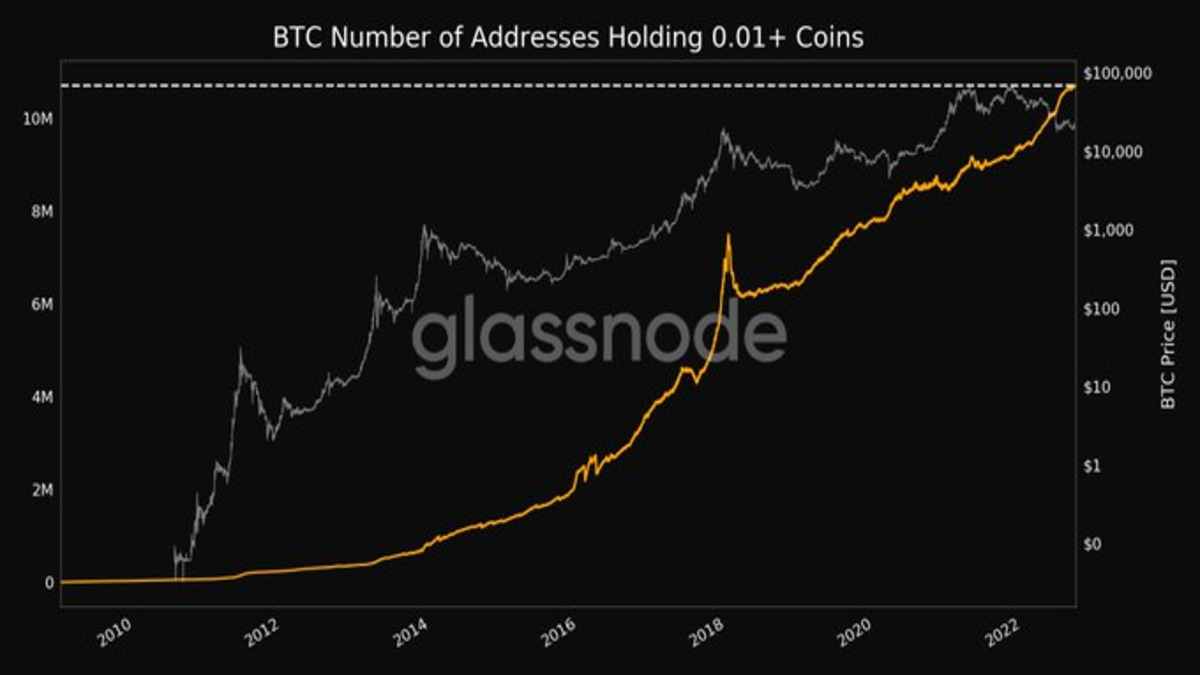 According to blockchain statistics, the number of Bitcoin ($BTC) addresses with token holdings on the Bitcoin network has reached a record high. It appears that investors who were previously on the sidelines are beginning to participate in the market.

The number of Bitcoin addresses that possess at least 0.01 BTC, which was worth around $184.74 at the time this article was written, reached a new all-time high of 10.7 million on September 15, according to statistics provided by the blockchain analytics company Glassnode.

The price of the flagship cryptocurrency, bitcoin, dipped below the $20,000 level again last week, coinciding with an increase in the number of minor bitcoin holders on-chain, according to statistics. At the time of writing, BTC is trading at $18468.00, and it is having trouble moving back over the psychological threshold it reached at its cycle high in 2017.

A trader going by the Twitter handle “Capo” has informed his more than half a million followers that the price of Bitcoin was rejected near its resistance zone (between the $22,500 and $23,000 mark) and is now resting at a support level.

If the price of bitcoin continues to trade at a level lower than $19,000, the cryptocurrency expert said in a subsequent tweet that, in his opinion, the price of the most prominent cryptocurrency might potentially reach a low of between $14,000 and $16,000.

Ali Martinez, a well-known analyst, has speculated that the increased number of new daily Bitcoin addresses being established is due to a “surge in interest from shelved investors” who are now purchasing Bitcoin at prices lower than $20,000 per coin.

#Bitcoin | The number of new daily addresses created on the $BTC network appears to rise again as it makes a higher high of 417,354 new addresses.

This suggests a spike in interest from sidelined investors to scoop up #BTC around the current price levels. https://t.co/sTy8CW9yC5 pic.twitter.com/ys5tFLUuaR

Investors “need to get into crypto” before the “greatest economic crisis in global history,” according to Robert Kiyosaki. He is the extremely successful author of the “Rich Dad Poor Dad” series of books on personal finance. Kiyosaki’s books have sold millions of copies.