The OG memecoin, Dogecoin (DOGE) is back to mid-December levels after a slew of corrections. The latest uptrend has none other than Tesla to thank.

Tesla CEO Elon Musk today revealed that the electric vehicle behemoth now accepts Dogecoin as payment for its merchandise. The announcement for the support stated that all Dogecoin-eligible products can be bought using the cryptocurrency. To make transfers in DOGE, users will need a Dogecoin wallet.

It also revealed that all eligible Tesla products will be clearly priced in the cryptocurrency which will also include any applicable taxes. According to reports, interested users can buy items such as belt buckets, whistles, chargers, and a quad bike using the memecoin on the official store.

The firm clarified that the Dogecoin network will charge network fees each time a payment is made with DOGE and the buyers will be responsible for any fees associated with the transaction. Tesla also mentioned that it will not accept payments from multiple wallets for a single order and merchandise bought with the crypto “cannot be returned, exchanged for cash.” An order placed with DOGE as the payment mechanism cannot be canceled as well.

The latest move comes a month after Tesla first confirmed that it was gearing up to accept the memecoin for merch purchases. Musk, on the other hand, has played a crucial role in DOGE’s rally last year after he switched camps. In May last year, the exec also disclosed teaming up and closely working with the developers of the crypto to enhance “system efficiency.”

More recently, in a Time Magazine interview, the chief executive compared the joke coin to Bitcoin (BTC) and subsequently commented that the former is more suitable for transactions. He had earlier stated,

“The transaction value of Bitcoin is low and the cost per transaction is high. At least at a space level, it is suitable as a store of value. But fundamentally, Bitcoin is not a good substitute for transactional currency.”

alright #dogecoin community, you know what to do pic.twitter.com/BMz5QS9Agf 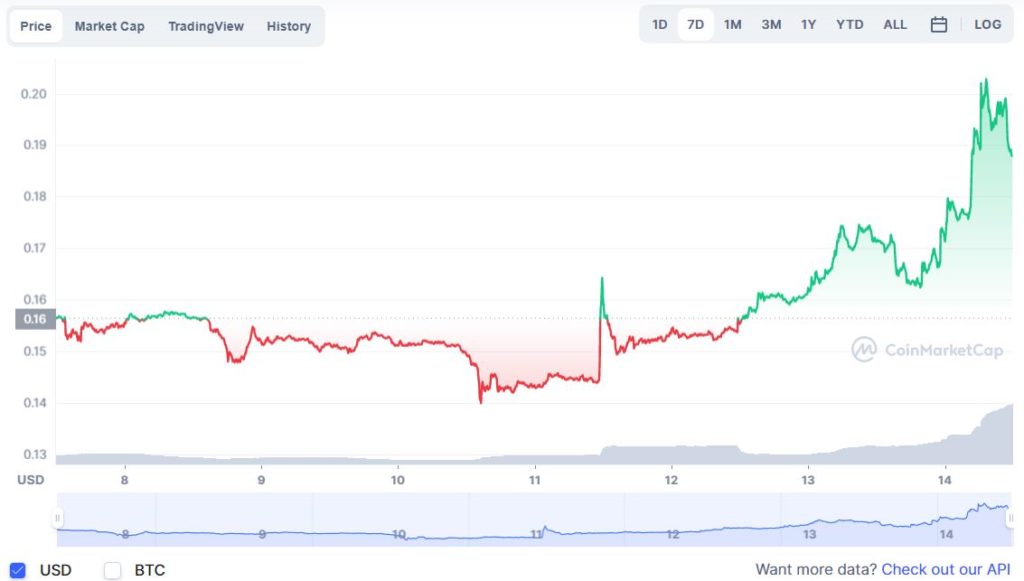 The price trajectory was quick to respond.

Following Musk’s five-word tweet, Dogecoin jumped by over 10% even as the broader crypto market struggled to recover. The price noted a daily high of $0.203 before stabilizing near the press time price of $0.188. Shortly after the news, “#dogecoin” started trending on the micro-blogging website, Twitter.

Notably, this isn’t the first time, Musk has managed to influence the price of DOGE. In fact, he is notorious for swaying the value of the canine-themed crypto with his comments on social media. His appearance on SNL last year, especially the infamous remarks on DOGE in his skit, stoked the market.