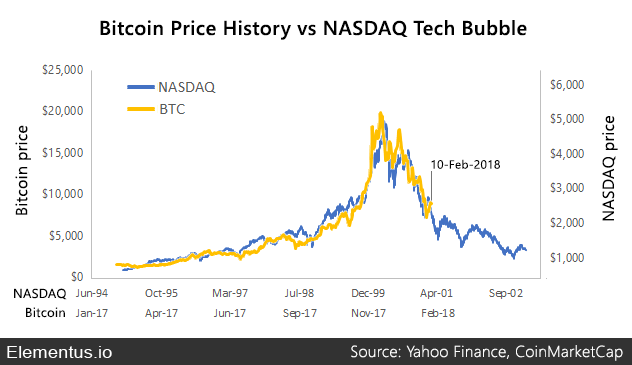 As you know, Bitcoin is often compared to the biggest bubbles of history, be it Dutch 17th-century tulipmania or the dot-com bubble of 2000. After the collapse of the latter, we saw how more than a half trillion US dollars were simply erased from the market.

Since December 2017, Bitcoin’s market capitalization has followed a similar trajectory, albeit on a much smaller scale. And two recent outbreaks of a sudden fall during the week led to a total loss of BTC to 250 billion or 77% relative to its highs. But, despite a similar model, market analysts believe the direct comparison between them is erroneous.

The founder of Angel Versetti in conversation with representatives of the portal The Independent expressed the opinion that they are still very far from the cryptocurrency bubble.

“We are experiencing a strong correction, but the bubble has not yet formed. All bankers and financiers jump to the signal of a cryptocurrency train and the bubble is still ahead. I think that when all cryptocurrencies and tokens cost $ 15-20 trillion, it will be a bubble, ” he continued.

In addition, bubbles can only be identified retrospectively, so all talk about it is too early. Looking at the changing history of Bitcoin , this particular drop from the highs of the end of 2017 represents only the fourth largest drop in prices in all 10 years of existence.

“One of the advantages of a bear market is that it will remove people who are looking for quick money and are not interested in basic technology. Those who understand the technology and see its benefits tend to hold on, adding value to the market , ”said an analyst at eToro.

In order for the benefits of the underlying technology to be realized, and the price of Bitcoin to stabilize and eventually rise again, many in the cryptocurrency industry turned to more control and regulation in order to increase investor confidence.

Herbert Sim, chief commercial officer of one of the cryptocurrency exchanges , believes that the control of the "Wild West" will legitimize and then stabilize the industry, which will allow it to reach the next stage of maturity.

He also added that institutions and governments are also beginning to recognize that cryptocurrencies are likely to become an integral part of the financial system.