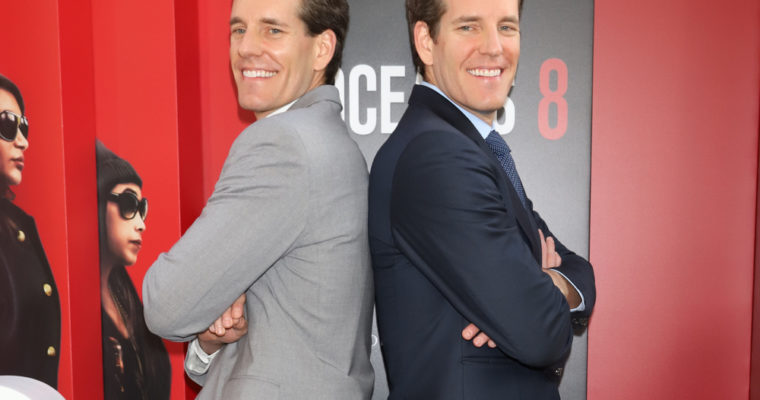 Earlier this month, it became known that the founders of the Bitcoin exchange Gemini Cameron and Tyler Winklevoss sued the creator of the notorious BitInstant service Charlie Shrem.

According to the twins, they did not receive 5,000 bitcoins from the “first bitcoin felon” (about $ 22.5 million at the current exchange rate). These funds are sure Winklevoss, Shrem spent on expensive real estate, sports cars Maserati and boats.

Whether Shrem will be able to resist the Winklevoss, who once sued Mark Zuckerberg for $ 65 million for the idea of ​​Facebook, is a moot point.

Only one thing is known for sure: in the world of cryptocurrency is never boring, while various interesting details may emerge over the years, creating new legal precedents.

BlockchainJournal magazine offers readers to recall how Charlie Schrem involved the twins in the cryptoindustry, his collaboration with Eric Vorges and how Barry Silbert almost invested in BitInstant on the eve of its closure by the US authorities.

28-year-old Charlie Shrem is an American entrepreneur and bitcoin enthusiast. He began investing in cryptocurrency in 2011 while still in college. In the same year, he and his friend Gareth Nelson founded BitInstant.

The service was conceived as the most convenient exchange that allows you to quickly and easily purchase bitcoins. Soon after launching, the business faced the problem of scaling. To solve it, Shrem received a target loan of $ 10,000 from his mother. Some time later Bittorin invested $ 125,000 “Bitcoin-Jesus” Roger Ver, now an ardent apologist for Bitcoin Cash.

In the spring of 2013, BitInstant received a $ 1.5 million investment from Winklevoss Capital, David Azar and other novice crypto-enthusiasts with substantial funds. At about the same time, Schrem, along with Gavin Andresen, Mark Carpeles and Roger Wer, became one of the founders of the Bitcoin Foundation.

BitInstant Exchange began to make a profit almost from the first day and soon about 30% of all Bitcoin transactions passed through it.

The leading role in BitInstant was played by the notorious Eric Vorges . In those distant times, by the standards of the cryptocurrency world, the current head of ShapeShift occupied the position of marketing director at Shrem's company.

Also, the gambling service Satoshi Dice, which was sold in 2013 to an anonymous investor for 126,315 BTC, brought Vorosh a considerable income.

Subsequently, due to this service, Vorhes had problems with the US Securities and Exchange Commission (SEC). The US agency equated Satoshi Dice-related activities with the issuance of unregistered securities and imposed a $ 50,000 fine on a Bitcoin entrepreneur.

Nevertheless, things went well with BitInstant: Shrem and Vorhes even planned to issue a debit Bitcoin card. Charlie enjoyed considerable authority in those years. In particular, he has repeatedly advised on issues of cryptocurrency of the famous venture capitalist Fred Wilson.

Nathaniel Popper’s Digital Gold book says that Barry Silbert, head of the Digital Currency Group, also planned to invest in a rapidly growing company. By that time, he had already made several bitcoin investments, seeking to diversify investments. For example, in the portfolio of Barry, CoinLab was already co-founder of the Bitcoin Foundation Peter Wessenes.

However, BitInstant's triumph did not last long: in July 2013, a collective lawsuit was filed against it in connection with the “deliberate distortion of information about the service.” Shrem attempted to resolve legal problems and even attract new investments, but efforts were in vain. Operations on the once extremely profitable and popular stock exchange had to be frozen, and soon the service stopped working altogether. Relations with influential business partners, including the Winklevoss, were cut off.

January 26, 2014 Shrem was arrested at John F. Kennedy International Airport. Authorities accused him of laundering bitcoins in the amount of $ 1 million through the infamous marketplace Silk Road . Also in the accusatory documents said that Charlie helped the users of this darknet site to anonymously acquire prohibited goods, including drugs.

On April 10, 2014, authorities accused Shrem of “making money transfers without a proper license and complicity in money laundering,” and also that he did not report suspicious activity to financial regulators. The founder of BitInstant pleaded guilty and was sentenced to two years in prison. Also, the authorities have appointed him a fine of $ 950 thousand.

“I realized that I don’t know everything , ” the bitcoin enthusiast wrote in conclusion. “ I was terribly arrogant and allowed my ego to command me.” Now I have learned to be patient and slow down if necessary. ”

Thus, Charlie Schrem entered the history of cryptoeconomics as “the first Bitcoin felon”.

On the basis of the charges, Shrem faced up to 30 years in prison, but, recognizing a part of them, he got off with just two years. In June 2016, the entrepreneur was released to once again plunge into the world of the blockchain and cryptocurrency. So, in November of the same year, Shrem, together with Jason Granger, launched the startup Intellisys Capital , offering clients direct investments in medium-sized companies from various fields.

It was planned that the investment portfolio of Intellisys Capital will consist of tokens issued in the Ethereum blockchain. Also, the new company was going to hold an initial offer of coins (ICO) in early 2017.

However, the idea with the release of this kind of tokens was a failure. So, the project participants soon realized that the SEC would certainly regard such an ICO as issuing unregistered securities with all the ensuing consequences. Shrem decided to leave the project, which had already ceased to exist in March 2017.

Charlie was sitting around for a short while, and in May 2017 joined the Decentral project as director of business and community development. The main product of the company is the Jaxx multiple currency wallet .

In the same year, Shrem took part in the development of the DASH project. He proposed to issue a debit card for this cryptocurrency, which would be available, in particular, to US residents.

In early 2018, Charlie Schrem became a co-founder of the Crypto.IQ project, designed to promote cryptocurrency and blockchain technology.

In a recent interview with Breaker Magazine, the creator of BitInstant has compared his life with a cryptocurrency market that is full of fast-paced ups and deafening falls.

In early November, The New York Times (NYT) published an article describing the events of 2012, when Winklevoss turned to Shrem for help in acquiring bitcoins. Then the brothers donated a total of $ 1 million to Shrem for the purchase of digital gold.

“Mr. Shrem involved the brothers in the bitcoin industry in 2012, becoming their first adviser in this young field ,” describes journalist and writer Nathaniel Popper six years ago.

In September 2012, Winklevoss sent the next tranche to Shrem, this time for $ 250,000. However, in return, the twins received bitcoins in an amount equivalent to only $ 189 thousand.

At that time, the price of Bitcoin was about $ 12.50. Based on this, Winklowoss concluded that they did not receive approximately 5,000 BTC.

According to the twins, they repeatedly asked Shrem to return the funds, but to no avail. So, in 2013, Cameron wrote the following to BitInstant:

“I was calm, but in this case, everything becomes absurd. I take it all seriously. ”

Years later, it turned out that the brothers still strongly demand the return of 5,000 BTC. An insufficient number of bitcoins was documented by a specially invited twin accountant.

Note that despite the ongoing collapse of the market, in 2018, the Bitcoin rate is many times higher than six years ago. This means that for Shrem, this whole story can turn into a round sum.

In an interview, Shrem said that after he was released from prison, he had very few funds, and he even had to work as a dishwasher. According to him, he had only a few BTC, which he used to cover current expenses.

However, Cameron and Tyler Winklevoss claim that right after serving his sentence, Shrem made several expensive purchases.

“After he [Charlie Shrem] spent $ 4 million to buy real estate, two Maserati and two boats, we decided to get to the bottom of the truth ,” Cameron said in a conversation with The New York Times.

Also in the NYT publication it is mentioned about the purchase of the former BitInstant mansion in Florida for $ 2 million.

“Either Shrem was extremely successful after being released from prison, or, more likely, he acquired six Florida properties worth $ 2 million, two Maserati sports cars, two boats and other property for the 5,000 bitcoins that he stole,” – said in the statement of claim.

The twins hired a private detective who, according to the NYT, tracked the movement of funds using blockchain tools. It turned out that 5,000 BTC had been moved to the “purse-related” addresses of Mr Schrem in the Xapo and Coinbase services.

Winklevoss filed a lawsuit against Shrem in a federal court in the Southern District of New York. Interestingly, the judge was appointed Jed Rakoff – the one that put Charlie behind bars in 2014. The judge ordered the Winklevoss to freeze the funds of the suspect at the time of the hearing, noting that Shrem “impedes the actions of creditors taken to return their funds.”

“The lawsuit mistakenly claims that Charlie misappropriated thousands of bitcoins six years ago. There is no share of truth. Charlie intends to resolutely defend himself and quickly restore his reputation , ”he noted.

On November 5, Shrem’s lawyers sent a counterclaim where the ex-head BitInstant’s involvement in the assignment of 5000 BTC was denied.

According to Charlie, the twins did not provide sufficient arguments to accuse him of a criminal plan. The document also states that Shrem never owned any bitcoins for that amount. Those who were on the 5000 BTC wallet associated with it belong to a third-party person, no one to “Mr. X”, whom Charlie helped to transfer digital assets to a cold wallet, while not having access to the funds.

As evidence, Shrem provided a listing of transactions with Blockchain.info and email-letters explaining the reasons for their implementation. According to the materials, 5000 BTC were transferred twice December 31, 2012 – to and from the ex-head of BitInstant's wallet. He also asked representatives of the judiciary to unlock assets frozen during the BitInstant case .

Charlie explained the expensive purchases by accumulating honestly earned funds, in particular, from working in a restaurant in Pennsylvania.

“After I was released from prison, I had less than $ 100,000. I worked for about six months in a restaurant in Pennsylvania , ”said Schrem. “ After that, I changed a number of jobs and I managed to save money and restore my financial position.”

The provided documents and arguments were enough to convince the court to lift the arrest from Shrem's bitcoin assets. The relevant decision was made on November 8.

Coinbase, Xapo, Digital Asset Holdings, Branch Banking and Trust Company, Noble Markets and ItBit submitted documents to the court stating that Schrem did not keep funds on any of these platforms. Exchange Poloniex reported that on his account is $ 0.41 in bitcoins. Bittrex representatives indicated that the corresponding wallets contain about $ 4.44 in Bitcoin and its fork, Bitcoin Gold.

However, the final point in this case has not yet been set: the Winklowoss suit against Shrem will be examined by a jury court on April 8, 2019.

Cryptoindustry is often and generally rightly called the “Wild West”, since many of its aspects are still in a legal vacuum. The real mass adoption of the blockchain and cryptocurrency is still far away. This means that the developing industry still has a long way to go, which will certainly be eventful and full of trials.

Charlie Shrem's case, as well as other precedents – SEC versus EtherDelta , the trial with ICO start-ups Airfox and Paragon, the “centralization” of the IDEX exchange, etc. — say that the state watches the young industry, taking time pretty tough measures.

Institutionalization means the streamlining and formalization of any relationship along with the establishment of norms and rules. And the participants of the cryptoindustry will have to reckon with the global process of its institutionalization, coupled with the ubiquitous tightening of regulation.