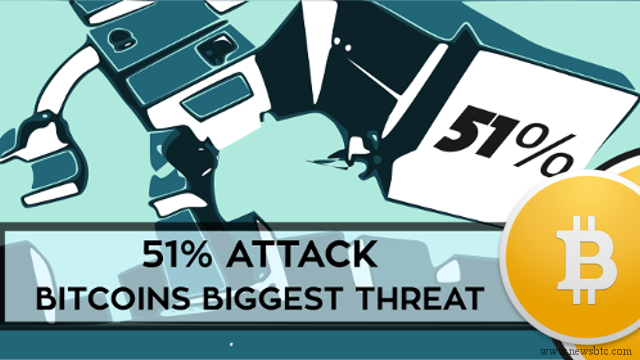 Cryptocurrencies based on the blockchain are subject to the so-called attack threat of 51%: when more than half of the computing power of a cryptocurrency network is controlled by some organization or group of individuals, it becomes possible to conduct conflicting transactions or malicious harm. We will tell you how it works.

When a bitcoin owner signs a transaction, she enters the local pool of unconfirmed transactions. Miners select transactions from this pool and form blocks from them. To add a block to the blockchain, they need to solve a very difficult math problem.

Each miner first tries to guess a 64-digit hexadecimal number (hash) that is less than or equal to the target hash. The hash is chosen by random search, and the one who wants to be first needs a huge computational power.

The more computing power a miner has, the higher his chances of finding a solution before others. After the miner finds this solution, he retransmits it (along with the block) to the rest of the miners, and all they can do is confirm it.

It is worth noting that the attacker will never be able to create a bitcoin transaction for someone else, because for this he will need a digital signature of this person (his private key). Therefore, without access to the corresponding private key, it is simply impossible to transfer Bitcoins from someone else’s account.

And now watch your hands. The malicious miner may still try to modify existing transactions. As you remember, when a miner finds a solution, he must relay it to all the other miners so that they can confirm it, after which this block is added to the blockchain (miners reach consensus ).

Honest members of the network work with one version of the blockchain, and the attacker creates another and does not report it to the other miners. Honest BTC miners do not participate in the work with this block chain, because they do not know anything about it – it is isolated from the rest of the network.

Now an attacker can spend all his bitcoins in the true version of the blockchain, which other miners work with. Imagine that he bought them Lamborghini. In a true blockchain, all of his bitcoins are spent. However, he does not include these transactions in his isolated blockchain branch. In this parallel version, he still has these bitcoins.

All the while, he continues to create blocks and confirm them in his blockchain branch.

The blockchain is programmed so that all decisions are made in it democratically, that is, by a majority vote. This is reflected in the fact that the longest block chain is always recognized as true, since most miners add blocks to their version of the blockchain faster than other network members do (thus, the longest chain is the majority).

This is exactly how the blockchain determines which chain is true, and this, in turn, is the basis for all balances of Bitcoin wallets . And here the race begins. Who has more computing power and who can add blocks to their chain faster than competitors?

Race: Revision of existing transactions through the promulgation of a new branch of the blockchain

As soon as the attacker manages to create a longer chain, he can suddenly unveil his version of the blockchain. The rest of the network will find that this (parallel) branch is indeed longer than the one they were working on, and the protocol will force them to switch to this blockchain.

Now the blockchain created by the malicious miner will be considered true, and all transactions that were not included in it will be immediately reviewed. The hacker had already spent his bitcoins on Lamborghini before, but this transaction was not included in his hidden blockchain – the one that is now recognized as true – and therefore these bitcoins belong to him again. He can spend it again.

This is the attack of 51% . It is so called, because in order to build its chain of blocks faster than other network participants, the malicious miner must have at its disposal more processing power (the same 51%) than all honest miners combined.

How is bitcoin protected against attack 51%?

In reality, such an attack is incredibly difficult. As mentioned above, the hacker will need more computing resources for this than all the other network members combined.

Given that hundreds of thousands of miners are currently working in the Bitcoin blockchain, an attacker will have to spend huge amounts of money on equipment to compete with them. Even the most powerful computers in the world cannot challenge the total computing power of such a network.

And there are many more reasons why the attack of 51% is meaningless. This is the risk of being caught, and the cost of electricity and the operation of equipment for mining , and the difficulty of sweeping traces and money laundering.

Such an operation will simply cost the hacker much more than what he can get if he succeeds – at least in the case of the bitcoin blockchain.

Who was the victim of the attack 51%?

Although Bitcoin continues to be protected from the attack of 51%, other cryptocurrencies have already faced this threat.

So, in April, attackers attacked the Verge network, in just a few hours getting a cryptocurrency worth more than $ 1 million. However, it should be noted that this was not due to the seizure of computing power, but because of a bug in the Verge code, which allowed hackers to release a block per second instead of a block every 30 seconds.

In May, 51% of Bitcoin Gold cryptocurrency, bitcoin fork, was attacked. The attack lasted for three days, as a result, the attacker received $ 18 million in BTG. After that, the developers decided to make hardfork to prevent further attacks.

Another victim of the same spring was the Monacoin coin. The attack lasted two, and as a result, the hacker received 90 thousand dollars.

An anonymous hacker recently promised to make an attack on the Einsteinium cryptocurrency and even announced that it will happen on October 13th. According to him, the purpose of the attack is not to steal money, but to show the vulnerability of altcoins. However, given that this year Einsteinium fell by 97%, the economic benefit from the attack on the coin is completely absent.