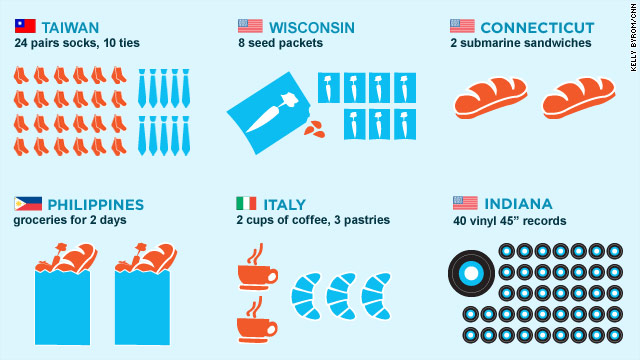 Bitcoin was created as a transactional currency for buying things. And as it grows in popularity, it is increasingly being accepted for payment for the most diverse products – from food and comics, to real estate, airplanes, and even citizenship.

Perhaps this is the most extensive class of expensive things that can be bought for Bitcoins. At the end of 2017, Lamborghini’s buyer, Peter Saddington, became the most prominent member of the YouTube channel, the owner of a bitcoin forum and the technical director of VinWiki.

White racing Lamborghini Huracan with a matte finish for 200 thousand dollars cost him 45 bitcoins. The same 45 Bitcoins have now jumped to 292.5 thousand dollars, but Saddington does not upset it – he recalls that in 2011, when he first heard about Bitcoin, he paid only $ 115 for them. So the supercar essentially cost him a hundred dollars.

Some early cryptoinvestors believe that the only decent way to spend bitcoins is to buy Lamborghini. The exchange for cash is considered a bad form; advocates of crypto-revolution prefer to “walk” all the way. There are several cases of buying Tesla for bitcoins: in 2013, Florida bought Tesla S for 91 BTC worth 109 thousand dollars for those times (today the amount would be 53.8 million dollars).

Car dealers who accept bitcoins say that sales of cars for cryptocurrency increased in December 2017 in parallel with the rise in cost of bitcoin, but now many continue to buy cars for bitcoins.

In the past couple of years, buying real estate for bitcoins has become increasingly popular. A special website for the sale of real estate at BTC offers the following options: a chalet in the French Alps for 4.95 million dollars, a penthouse in Panama for 3,595 million dollars and a private Australian island for 3.5 million dollars. You can also look at real estate in the United States, Thailand, the Caribbean, Turkey, Bali – almost anywhere in the world.

Reports on the purchase of real estate for Bitcoins began to appear in 2014, when in March an anonymous buyer purchased a villa in Bali for 800 BTC (500 thousand dollars at that time and 5.2 million dollars by today's standards), and another anonymous buyer purchased 1 , 4 acres on Lake Tahoe, California for 2,739 Bitcoins ($ 1.6 million then and more than 17.8 million now). We call these transactions “purchases for Bitcoin” simply – in fact, Bitcoin was converted to Fiat to complete a transaction .

The largest real estate purchase directly for Bitcoins was made in February 2018, when Bitcoin investor Michael Komaransky sold his mansion in Miami for 455 BTC – then this amount was approximately $ 6 million. At the time of this writing, the same 455 BTC cost a little less than 3 million.

When the rich and famous travel, private jets are used, and the new generation of bitcoin millionaires is not far behind. The first example of payment for a private aircraft with Bitcoins was recorded in 2014, when a member of the Bitcoin Foundation, Olivier Janssens, flew a charter flight on a private plane from PrivateFly.com.

Although the details of the transaction were not disclosed, the price list on the website shows prices at 54.95 BTC or 35 thousand dollars for the flight then and very heavy 357 thousand dollars now.

Journalists do not find records of actual purchases (probably because bitcoin millionaires prefer to remain anonymous), but it’s known that from December 2013 you can buy your own plane from SkyCraft Airplanes for bitcoins. When sales of SkyCraft SD-1 Minisport started, the plane cost 80 BTC. The current price of the SD-1 Minisport is 54.85 thousand dollars or approximately 8.5 BTC.

Universities are also starting to accept payments in Bitcoins – so now you can learn about the blockchain and cryptocurrency by paying for the same cryptocurrency rates. The University of Nicosia in Cyprus became the first educational institution that started accepting Bitcoins for payment in 2013.

The first American university that provided the same opportunity in 2014 was King's College. Currently, training there costs about $ 35 thousand per semester, for all four years, you will have to pay about $ 140 thousand or 21.53 BTC at the current price.

Other universities that accept bitcoin include the European School of Management and Technology in Berlin and the University of Applied Sciences and Arts of Lucerne in Switzerland, which announced the approval of Bitcoin as the official means of paying for education in October 2017. The fact that the Swiss university accepts bitcoins is not at all surprising – the Swiss city of Zug is called Cryptodolina: over 50 blockchain companies and startups are based here.

The small state of Vanuatu in the South Pacific has become the first country in the world whose citizenship can be acquired for Bitcoins. The cost is about 180 thousand dollars, so if you need a second passport and there is about 27 BTC in your wallet, then you can become a citizen of a tiny but beautiful island country.

In fact, they don’t directly accept Bitcoins – the BTC is responsible for exchanging dollars for the purchase of citizenship by an authorized agency in Australia.

A small Caribbean country of Antigua and Barbuda accepts Bitcoin according to its citizenship program – here it costs a little less than in Vanuatu, only 135 thousand dollars or a little more than 20 BTC. They became the first country to accept Bitcoin as a payment for citizenship as of July 23, 2018.

The presence of the yacht is one of the distinguishing features of the super-rich, and Bitcoin millionaires also joined her.

It is not easy to find concrete examples, but this market is definitely thriving, and the Florida-based company Dennison Yachting has announced the addition of bitcoin as a payment method in response to customer requests. Her example was also followed by 26 North Yachts – the largest yacht broker from Florida.

The list of things that can be bought for bitcoins is replenished, and since the cost of bitcoin is still high, luxury goods are most in demand.

Buying them for Bitcoin really makes sense: you can save 5−10% on the commission , which is a lot, considering that deals are made for hundreds of thousands or even millions of dollars.

As long as Bitcoin does not lose ground, the trend towards large-scale purchases for cryptocurrency will almost certainly continue, and as the Bitcoin community grows, the frequency of such purchases will also increase. By the time our children grow up, paying for a car and an apartment in Bitcoins and other cryptocurrencies may well become the norm.