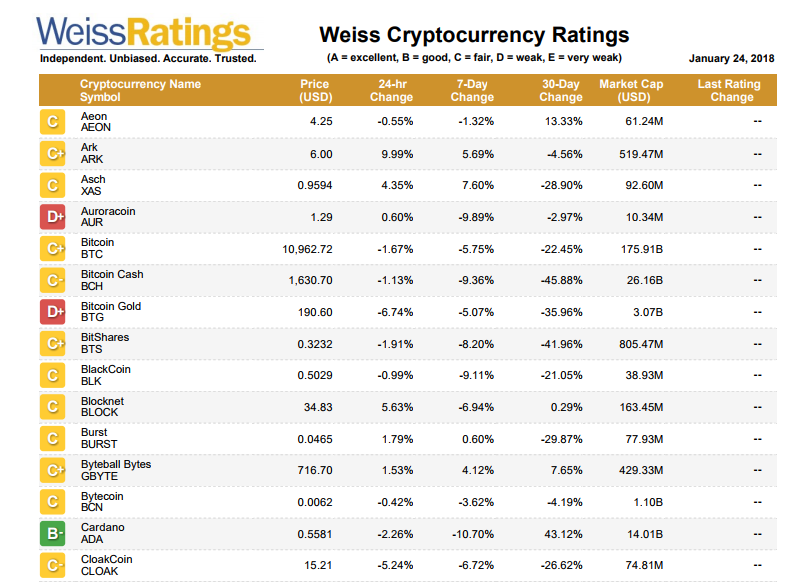 In a recent report, the Weiss Ratings financial rating agency downgraded Litecoin and Cardano, while Monero upgraded it.

Litecoin and Cardano ratings dropped from "C +" to "C". Litecoin's risk / reward score remains at “D,” both of which are rated “weak,” while the level of technology / acceptance is “B +,” the first being rated as “satisfactory,” and the second as “excellent.” Cardano has a “D-” rating for risk and reward, but a “B +” for technology and acceptance.

Last time, LTC and ADA were in 4th and 5th place, respectively, now both coins have dropped in the cryptocurrency rating . BTC and ETH top the list with their B-classes, followed by four coins with a C + rating.

One of them is Monero , whose rating has been upgraded from "C" to "C +". Cryptocurrency risk and reward were rated “weak” and rated “D +”. Evaluation of technology and adaptation is “B”, so “good” in both cases.

Weiss ratings give cryptocurrencies ratings from A to F, while a plus or minus sign indicates the upper or lower third of the rating range.

The Agency recommends “keep in mind that Weiss Crypto Rating ratings reflect not only long-term, relatively stable factors, such as technology and implementation, but also short-term, volatile factors, such as investment risk and reward. Therefore, they can change with a certain frequency. "

Publication date 09/20/2019
Share this material on social networks and leave your opinion in the comments below.