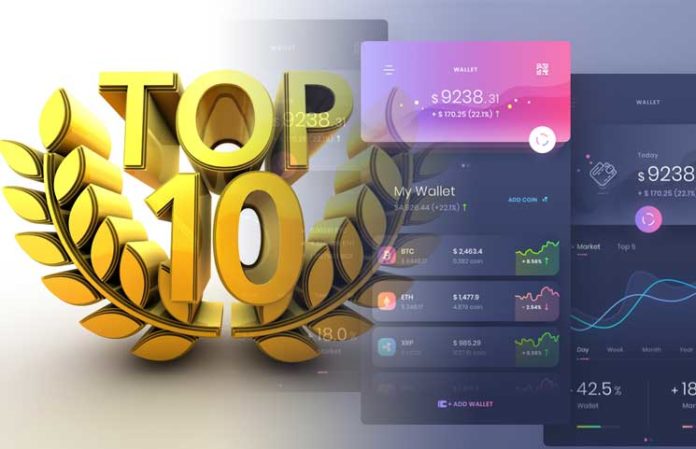 The microtransaction protocol of the Lightning Network in the future can make the mass distribution of Bitcoin a reality, while at the same time implementing Satoshi Nakamoto's concept of digital p2p money.

The growth of this second-tier network is indeed proceeding at an enormous pace. So, by mid-March, the number of available nodes exceeded 7,300, an increase of almost 19% over the month. The number of open channels has grown by 45%, which now numbers more than 35,000, and the total network capacity has exceeded 820 BTC ($ 3.2 million at the current Bitcoin rate ).

To maintain this progress, a well-developed infrastructure is needed, one of the key links of which, besides the nodes and channels, is user Bitcoin wallets . The tireless developer community already offers a lot of impressive solutions, the best of which we have gathered in this review.

For Android devices, this is one of the most functional SPV wallets based on BIP-0037 . The well-known developer Anton Kumaygorodsky is working on creating a wallet. BLW supports transactions not only on the Lightning Network, but also on traditional onchain transactions in the main Bitcoin network .

A unique feature of BLW is the use of a system for storing information about tokens, thanks to which users have the ability to store channel backups and to delay the return of transactions in anonymous mode.

In addition to open source, another key aspect of BLW is that it stores information without the use of third parties.

“This means that your money is stored right on your phone and nowhere else, which gives you ultimate resistance to censorship: no one can freeze your account or cancel your transactions . Only the user himself is the only responsible party for the safety of funds, ”explains Anton Kumaygorodsky.

In case of loss or damage of a mobile device, it is enough to recall the so-called “mnemonic key” to recover funds.

The brainchild of the French startup ACINQ – Eclair wallet was launched in April 2018 and positions itself as the most popular Lightning wallet for Android.

“Eclair Wallet is a new-generation bitcoin wallet capable of running on the Lightning protocol. It can be used as a normal Bitcoin wallet, as well as connected to the Lightning Network to make cheap and fast payments, ”the application description says.

Despite some problems that were discovered soon after the first release of the wallet, in October of the same year, the ACINQ team raised $ 1.7 million in investment.

As reported, the funding received will allow the company to hire several highly specialized developers to create mobile and desktop LN-wallets and to work on an API called Strike, designed to provide simple reception of Lightning-payments.

The release of the beta version 0.4 of the LND wallet from Lightning Labs, which took place in March 2018, is unofficially considered the launching date of the main Lightning Network. In September of the same year, version 0.5 was released – its main task was to support the Neutrino protocol, which significantly reduces the load on the CPU and the amount of memory required for the Lightning protocol to work.

LND implementation is one of the most important in the Lightning Network, and although the proposed wallet may not be the easiest to use for tech-savvy users, it rightfully occupies one of the first places in the ranking.

Another fairly popular Zap Lightning wallet was created by developer Jack Mullers and was introduced in January 2018. It is based on the version of the LND 0.5 desktop wallet from Lightning Labs with the support of the Neutrino protocol and the implemented privacy option in the form of additional support for Tor.

The wallet features a simple and intuitive user interface that greatly facilitates transactions in the Lightning Network. In addition, you can create multiple wallets and remote control Lightning-nodes.

Zap is currently in beta. The last major version 0.3 was released in December last year, after which several more minor updates were made. A unique feature of Zap is that, in addition to Bitcoin, the wallet also supports Lightning transactions on the Litecoin network.

Peach Wallet from Lightning Peach's Bitfury team is the only Lightning wallet available for all of the most popular desktop and mobile platforms.

Peach Wallet was released in January 2019 along with a variety of other tools designed to help develop the Lightning Network. Among them were also software and hardware solutions for accepting payments, solutions for merchants and payment processing, tools for developers and Lightning node.

Breez, sometimes called “Venmo for Bitcoin,” allows you to make instant Lightning payments, focusing on simple payments between friends, as well as on support for merchants using an NFC application.

Bluewallet is designed for simple and non-configurable Lightning transactions, focusing primarily on newcomers to the cryptocurrency space, or on users who prefer convenience and simplicity.

Bluewallet has its own marketplace for Lightning-based applications like Bitrefill, Yalls, Zigzag and Ln Roulette, however, you should keep in mind that the wallet itself is custodial, that is, it acts as a third party that stores the funds of users.

Spark is a “progressive” GUI application that allows you to connect to a node with the implementation of c-lightning from Blockstream. Due to its simplicity, customization capabilities, and support for the Tor protocol, it is quite popular.

The developers plan to create an application for iOS.

Another fully custodian Lightning wallet for mobile devices, Wallet of Satoshi offers a simple and practical way to make microtransactions.

Additional unique options of Wallet of Satoshi are the possibility of buying Bitcoin without having to leave the wallet, replenishing the account from the account on the stock exchanges, as well as paying for goods and services through scanning a QR code.

“So simple that your mom could use it,” – this is the slogan given in the description of Wallet of Satoshi on the official website.

Casa Node, which was released in September 2018, hardly needs to be introduced. Unlike all the wallets listed above, this is a physical device that offers the ability to easily and easily manage your own Bitcoin and Lightning nodes. There are also extensions for Google Chrome and Firefox browsers that allow Casa nodes to interact with any websites with built-in Lightning functionality.

The device is designed for ordinary users who do not want to burden themselves with unnecessary technical information, but the external simplicity and convenience cost money – this is the only product on our list that is completely commercial. Nevertheless, the fact that not so long ago the device was acquired by Twitter CEO Jack Dorsey speaks about its popularity.

Tippin for Chrome and Firefox

In February of this year, Twitter users had the opportunity to make Lightning payments due to the expansion of Tippin for Chrome and Firefox.

In fact, Tippin is a custodial wallet designed to reward users of popular social networks for their favorite posts or comments.

Having logged in to Tippin using a Twitter account, a user will have a lightning icon next to the Like and Retweet buttons, by clicking on which other users can encourage them to record a micro payment.

Note that the service interacts not only with Twitter. Users can set a button to accept payments on their blogs and websites.