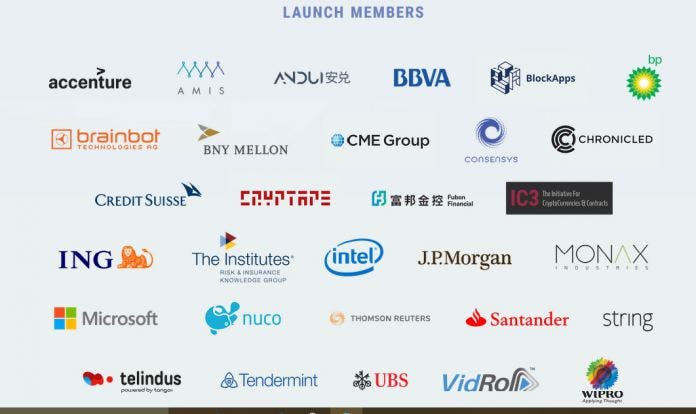 The two leading global consortium consortiums Hyperledger Project and Enterprise Ethereum Alliance (EEA) announced an unprecedented partnership that provides for the creation of unified standards for corporate distributed networks developed by the participants of these two organizations.

As stated in the joint statement of Hyperledger Project and EEA, based on the principles of adherence to open source cross-platform cooperation will help accelerate the mass adoption of blocking technologies in the business environment.

Great to see @brianbehlendorf & Ron Resnick of EEA standing together at Hyperledger's Member Summit while announcing that they have joined each other's organizations as Associate Members! https://t.co/29rfsUabwG pic.twitter.com/UruGZUUkhq

Each organization is part of another as an associate member.

"This is a time of great opportunities. Cooperation on the rights of mutual associate membership opens the possibility for both organizations to work together more closely. In addition, Hyperledger developers can participate in the EEA certification program, which will ensure compatibility of solutions with projects that focus on the Enterprise Ethereum Client Specification , "said Eene CEO Ron Resnick.

Accordingly, representatives of the EEA community working on specifications and standards will have the opportunity to collaborate with colleagues from Hyperledger with a view to their wider implementation.

"Standards, specifications and certification – all this helps corporate customers to confidently implement the proposed solutions, because they get the best guarantees of platform compatibility, as well as a wider choice of suppliers," said Hyperledger CEO Brian Belendorf.

Also, participants of both organizations will be able to cooperate in various working groups, meetings and conferences around the world, thus uniting numerous developers.

"Our organizations have similar goals, such as expanding and strengthening the community, as well as wider adoption of corporate blockade technologies. We hope to bring the idea of ​​the fallacy of the opposition of EEA and Hyperledger ", – said in a statement of the two organizations.

It is noted that work that emphasizes the unity of the two organizations is already underway. So, in 2017, the Hyperledger Burrow project was launched, which is the implementation of the byte-code interpreter of the virtual machine Ethereum (EVM), operating under the license Apache.

Earlier this year, the Hyperledger Sawtooth project added EVM support for transaction processing, thus implementing the smart contracts for the core Ethereum network on the Sawtooth network. This initiative is in an active state, and the developers expect in the very near future to verify its compatibility with EEA Spec 1.0. In addition, EVM support is also available in Hyperledger Fabric .

Another example of the ongoing collaboration is the EEA Working Group on Trusted Environments, which creates a prototype of the implementation of the proposed standards under the name of Private Data Objects on the basis of Hyperledger Labs.

Recall, Hyperledger Project was launched in December 2015 with the participation of the Linux Foundation, IBM Corporation and a number of major global banks. At the moment, the organization includes more than 250 companies.