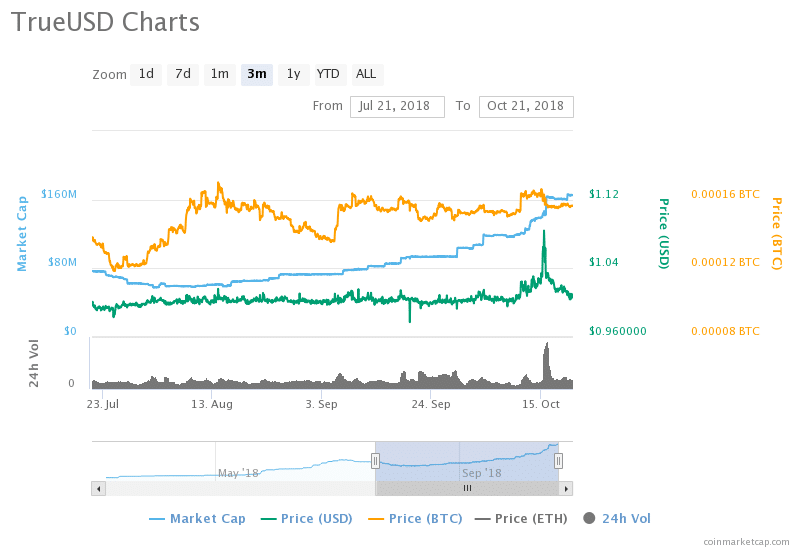 Despite the sharp decline in capitalization that has continued since October, Tether (USDT) occupies a virtually monopolistic position among the other steybcocoins.

This "stable coin" is currently trading below the target mark of $ 1, and its capitalization at the January mark:

Nevertheless, the USDT is still in the top ten in terms of market capitalization (8th place), and the market share of the more “young” steybcocoins is still extremely low:

Tether's only competitor, whose market share exceeds 1%, is Paxos Standard Token (PAX), which is 50th in market capitalization. At the same time, the share of USDT among the other steyblecoin is 97%. The total market value of all “stable coins” is about $ 2.5 billion.

On the other hand, USDT is currently represented on 400 trading floors. At the same time, PAX is in the listing of only 35 platforms, which indicates a significant potential of this coin.

It is also noteworthy that on Wednesday , when, due to the collapse, the market “lost” $ 30 billion, the volume of trading in new USDC, TUSD and DAI steylcocks grew by more than 200 percent. Thus, many investors see such coins as a safe alternative to high-volatility assets.

Below is illustrated the growth in trading volumes with new stablebcoins during November 14-15. At that time, the exchange turnover of the USD Coin (USD-C) coin from a startup Circle grew by almost 400%.

The growth of steklebkoinov popularity is also largely due to the fact that due to regulatory obstacles on many exchanges the fiat US dollar is not represented, but only its alternative in the form of tokens.

Earlier, Amarkets analyst Artem Deyev expressed the opinion that one of the reasons for the recent collapse in the market is the desire of traders to go to steyblkoiny.