As the cryptocurrency market became lethargic, interest in Bitcoin and other digital assets declined significantly. According to Google Trends, the number of searches for the word “Bitcoin” has decreased by almost 93% (compared to the maximum rate registered in December 2017).

On this fact in his Twitter drew the attention of economist Tur Demestr, who is also the founder of Adamant Capital. 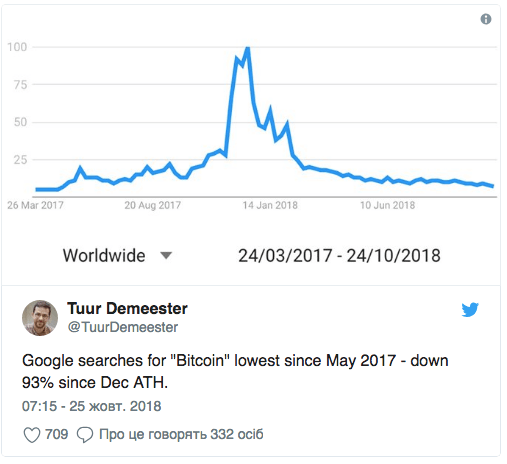 In August, Demester has already published an article stating that in 2018 the cryptocurrency market is unlikely to reach new record heights. Since then, the number of search queries for the word “Bitcoin” has decreased by 30%.

He mentioned a lack of interest on the part of system institutions, such as pension funds and mutual funds, extinct retail interest and a decline in revenue from Bitcoin transactions as the main reasons for their pessimistic forecast.

Meanwhile, some crypto experts argue that reducing volatility and less interest among hunters for the “quick dollar” is a good trend for the industry.

The fact that the current situation in the stock market has no effect (positive or negative) on digital assets is an extremely positive sign. This is a vivid example of the fact that cryptocurrencies remain independent, and this only increases their use as a powerful tool for managing assets.