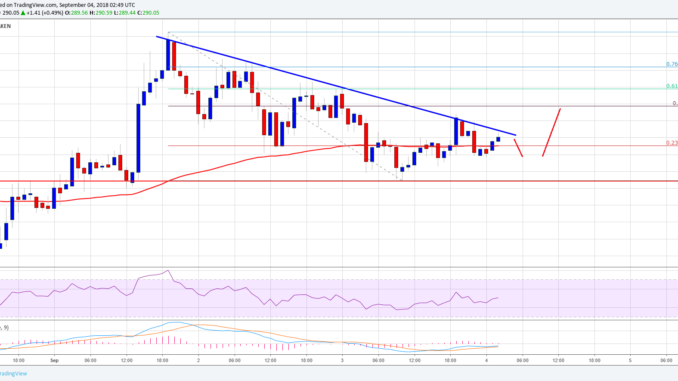 CoinDesk analyst Sebastian Sinclair is confident that the moderate recovery in the price of Ethereum that continues over the past two weeks will continue and soon the bulls will test the $ 240 mark.

The bears did not manage to destroy the support line drawn from the lows of September 17 and 25. At that time, the ETH cryptocurrency “managed” to even be on the third rung of the CoinMarketCap rating against the background of a short XRP rally.

At the time of writing, Ethereum is trading at around $ 225.

Recently, the price range has narrowed and Ethereum has formed a “symmetrical triangle” shape, which in this case can be interpreted as a trend continuation pattern.

On the same graph, you can see that the August symmetrical triangle also turned out to be a trend continuation pattern – after the breakdown of its lower boundary, Ethereum updated the minimum of 2018.

Since the price moved up on the eve of the appearance of the last symmetrical triangle, it can be assumed that this time the upper limit of the figure will be broken.

In both cases, it can be seen how, against the background of consolidation of the price, trading volumes decreased.

On the younger timeframe, there has recently been a slight increase in trading volumes, which at some point reached mid-September values.

Against this backdrop, the lines of the MACD indicator cross the zero mark. All of this suggests a growing likelihood of an upward price out of a narrowing range.

However, the closing of the daily candle below $ 214 may “put a cross” on the bullish formation from the upper lows (higher low) and on the likelihood of completion of the bearish moods that have been going on for 10 months already.

Recall that last month, Sebastian Sinclair suggested that the $ 8500 mark would complete the bitcoin downtrend .