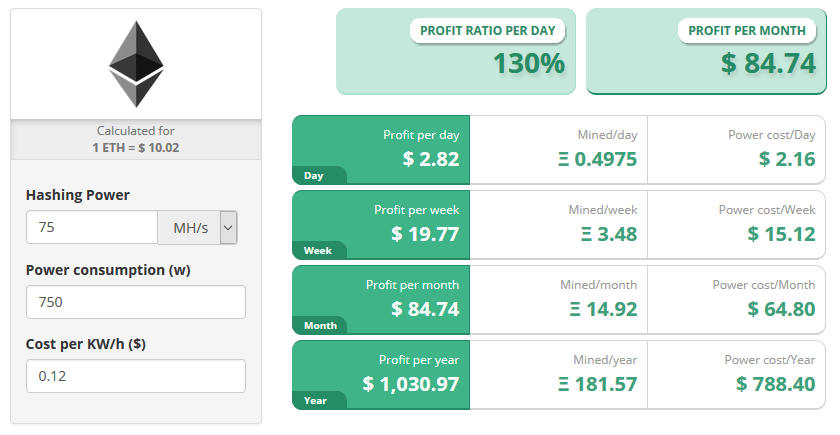 According to the analysis of the American company Susquehanna, working in the areas of trading and investment, Ethereum mining using GPU-video cards no longer makes a profit. This writes the Cointelegraph .

The analysis states that the monthly income of ETH miners using the GPU reached $ 0 on November 1 of this year, although in July 2017 it was almost $ 150.

According to Susquehanna analysts, the main factor in the decline in profitability is the fall in the rate of Ethereum – at the time of preparing the material it is 181 dollars, which is 85% lower than the record 1,350 dollars in the middle of January 2018.

It is noteworthy that on July 17, 2017, when the profits of the GPU miners of the broadcast were $ 147, and the hash rate was significantly lower than today's values, this crypto asset was trading at $ 175.

Susquehanna's semiconductor analyst Christopher Rolland, in a conversation with CNBC, confirmed that using NVIDIA's flagship GPU for ETH mining is "no longer profitable." He also noted that NVIDIA’s quarterly revenue from crypto-business fell by about $ 100 million.

In addition, in his opinion, the report of NVIDIA for the 3 quarter, which will be published this week, will show that the company's income from the crypto-business is "close to zero":

“According to our estimates, this quarter, NVIDIA’s revenue from sales of GPU miners will be very low, which is in line with recent comments from the company's management that they don’t expect profits from crypto business in Q3 2018,” Rolland said.

In addition, analysts from Trefis recently predicted that NVIDIA’s total revenue would increase in Q3, but, like Susquehanna, they believe that the company's sales associated with cryptocurrencies will continue to fall.