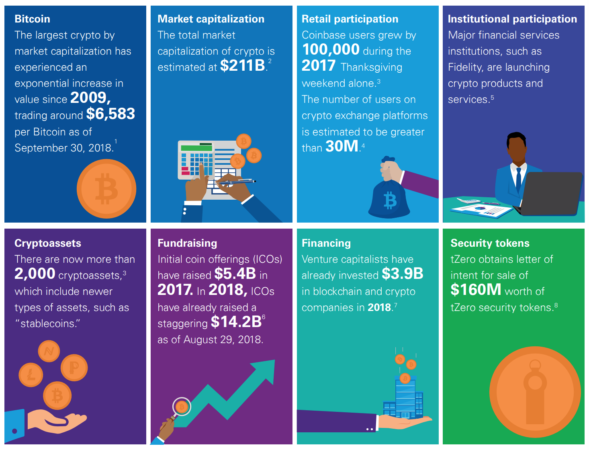 Institutionalization, the elimination of volatility and functioning products will allow you to fully realize the potential of cryptocurrency assets. This is stated in the report of the international auditing company from the "Big Four" KPMG, prepared with the support of Coinbase, Fundstrat Global Advisors and Morgan Creek Digital.

KPMG analysts have concluded that since 2017, cryptocurrency has been competing with traditional asset classes in terms of investment. In 2018, the competitiveness of digital currencies has strengthened new financial mechanisms, in particular: the platform of security tokens and steylcocoins. However, so far, cryptocurrencies are in the shadow of traditional assets with a global capitalization of more than $ 300 trillion, the report says.

The next step to create trust and scale up cryptoindustry is institutionalization, analysts at KPMG say. In their opinion, legal and tax uncertainty, as well as the lack of accountability from cryptocurrency companies to regulatory authorities, are currently preventing institutionalization from entering the industry.

Experts added that on the way to the widespread adoption of a new class of assets is a gap between their use and existing developments. According to KPMG, many of the existing 2,000 cryptoactive assets have no functional solutions associated with them.

It is noted that additional obstacles that need to be eliminated are the lack of a reliable system of clearing settlement and problems during forks of cryptocurrencies.

In the report, analysts also presented the main cryptocurrency uskekeys. For example, Bitcoin can act as a digital means of accumulation, Ethereum as a tool for raising funds, and Litecoin is useful for fast and cheap p2p exchange.

In addition, thanks to cryptoactives, tokenization of the economy can be one of the most effective innovations in the industry.

“ICO is a significant innovation that provides new methods for more efficient capital raising with the participation of much broader groups of investors,” the report says.

KPMG experts noted the importance of KYC procedures when performing transactions with cryptocurrencies. However, anonymity tools (such as zero-disclosure evidence or ring signatures) do not necessarily mean that transactions are illegal, they added.

In order for cryptoactive assets to be classified as currencies, they must correspond to the basic functions of money – to be a unit of account, a means of accumulation and exchange.

Recall, according to the creator of Dogecoin cryptocurrency Jackson Palmer, institutional money carries the danger to the cryptoindustry.