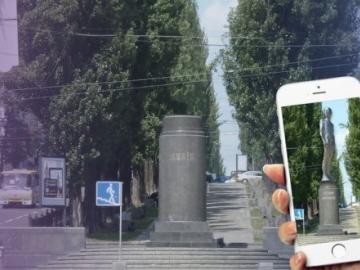 On Saturday, September 29, in Kiev on the site of the former monument to Lenin, a virtual monument was opened to the creator of Bitcoin Satoshi Nakamoto. This installation was the first in the framework of a global project to create Augmented Reality Cities under the auspices of the Satoshi Nakamoto Republic.

The event began with a procession of crypto-enthusiasts who carried posters with slogans in support of bitcoin and the decentralization of society: "Bitcoin is secure by nothing", "We want a pension in bitcoin", etc.

He added that out of a simple desire to have fun the idea quickly developed into a global project to create virtual cities of augmented reality.

According to the organizers, the virtual monument reflected all the personalities that people represent Satoshi Nakamoto (woman, artificial intelligence or aliens).

"Until the end of 2018, two more virtual images of Satoshi Nakamoto will appear in the United States. Younk, the world's first music block-platform, joined the initiative. Co-founders of the company Pavel Elizarov and Andrey Dakhovsky became the founders of virtual monuments in Los Angeles and Miami, "the organizers of the action said.