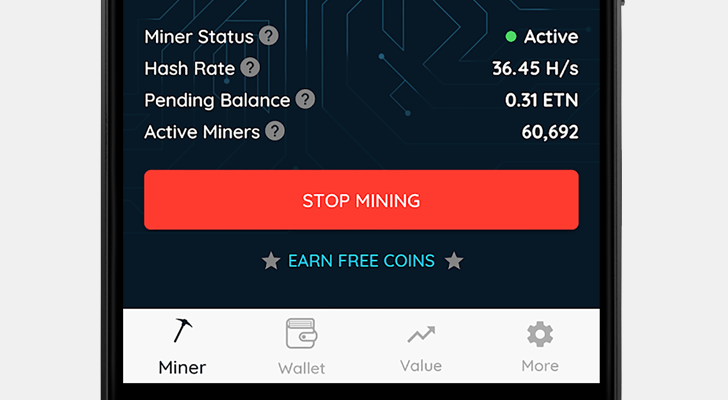 Apps supposedly designed for mining have been found in the Google Play store, but the cryptocurrency they are proposing to mine, in fact, cannot be mine, writes Bleeping Computer .

These applications were discovered by Fortinet, whose employees saw that they were moving ahead as mining tools:

None of these cryptocurrencies cannot be mined, and applications only pretend that they are earning virtual currencies, while they themselves are used solely for advertising purposes.

For example, in the Ripple mining application, users can click on the Start button and supposedly start mining the XRP cryptocurrency. During the "mining" it will even show the hash rate and slowly increase the counter of mined coins.

In fact, as the application code shows, this hash rate is a random value, but it does not mine anything. Moreover, when users try to get the lined coins, the application automatically shows them the message: “Error! Check the address of the wallet.

According to Fortinet, these applications simply show ads. By luring users with money on mining cryptocurrencies, application developers are hoping that they will leave them open in order to show ads and thereby generate income for them.

The existence of such applications has been known before. In the past, ESET researcher Lucas Stefanko talked about how he found similar applications, as well as applications for cryptodikeking and theft of coins from users' wallets.

“These fake apps aren’t as popular as they were at the end of 2017 or January 2018. According to my observations, they copy the dynamics of the course of Bitcoin, says Stefanko.

For an attacker, the tactic of creating more applications is more beneficial due to the rise of the course and the fact that people want to enter this topic as soon as possible. ”