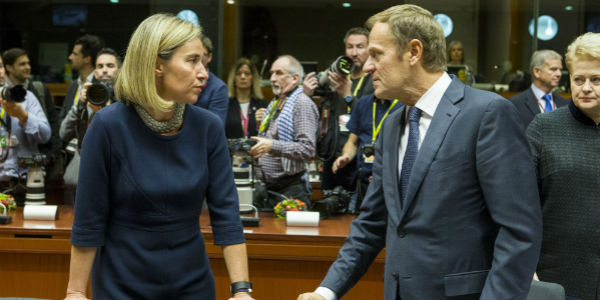 According to the Lithuanian website Delfi, a round-table discussion was held in Brussels on November 20, which was attended by the head of the blockchain’s Vilnius center Egle Neumekstayte, EU Commissioner for the Development of the Digital Economy and Society Maria Gabriel and the Director General of Communication Networks, Content and Technology Roberto Viola.

The meeting was attended by CEOs of Bosch, Deutsche Bhan, Shell, Ripple, MAERSK, Airbus, Philips, Schneider Electric, Fujitsu, Accenture. Among other things, the participants touched upon such topics as governance, trust by default, compliance with legislation, communication with citizens, organization of European-level sandboxes, industry cooperation and interoperability.

Bulgarian politician Maria Gabrielle, Commissioner for Digital Economy and Society of the European Union, said it was clear to her that the EU needed to continue such a dialogue. She said:

I am happy that the blockchain leaders and entrepreneurs from around the world support this initiative. Blockchain is a technology that can transform reality at a deep level. It will have a significant impact on the business and public sector across the globe.

According to the Commissioner, the ambitions of the EU are great, and Europe intends to move quickly. For the EU, this is an opportunity to become a leader. Gabriel noted that the EU “missed the Internet”, but this time it will take advantage of the chance. The Commissioner expressed her conviction that the EU could become a leader in the adoption of global blockchain standards, which requires close cooperation among the participating countries.

According to Gabriel, the partnership has already been implemented, and the next step is the International Blockchain Association. According to her, the EU should create an international organization open to all: public administrations, regulators, companies and startups.

Roberto Viola, head of the communications, content and technology department of the European Commission, agreed with Gabriel, stressing that this time the EU will not miss the chance, as happened with the Internet, and also noted that artificial intelligence and blockchain will be the “next generation” of the Internet.

For her part, the head of the Vilnius blockchain center Egle Neumeickshtaite stated that her department is proud to become the founder of the International Blockchain Association along with such major players on the blockchain scene as IOTA , Airbus, Phillips, SAP, and many others.

She noted that startups also play a significant role in the blockchain ecosystem, so it is important to create a single platform on which all participants can share best practices and respond to challenges.

“I hope that within the framework of this initiative we will also turn to the development of a legislative framework, since many companies need legal certainty that will enable them to move from experimental options to production.”

The next similar meeting will be held in December.