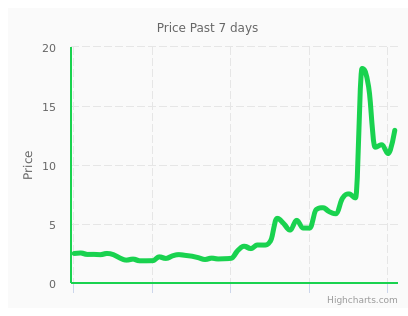 This morning, the Decred (DCR) cryptocurrency price peaked at $ 54. Later, the price dropped to $ 48.30, but it is possible that DCR may become one of the most actively traded coins in the near future.

The amount of DCR has risen to nearly $ 23 million in the last 24 hours, with most of the deals being made with Bitcoin (BTC). The volume of DCR trades at Binance is about 22% (DCR / BTC pair).

DCR is a slowly growing coin that is still 62% below its record level. Nevertheless, the cryptocurrency showed very good results last year, then its price increased by more than 76% in dollar terms. For comparison, DASH has lost almost half of its dollar value over this period, and the price of Ethereum (ETH) has fallen by 33% since October 2017.

This digital asset was previously unknown, but after adding Decred to the Binance, its popularity could increase significantly. Heshreit Decred almost doubled in October, which is another factor in the growth of the coin price.

It is also worth noting that Decred was included in the list of the Coinbase Custody program for safe storage of assets.

And what do you think about Decred cryptocurrency?