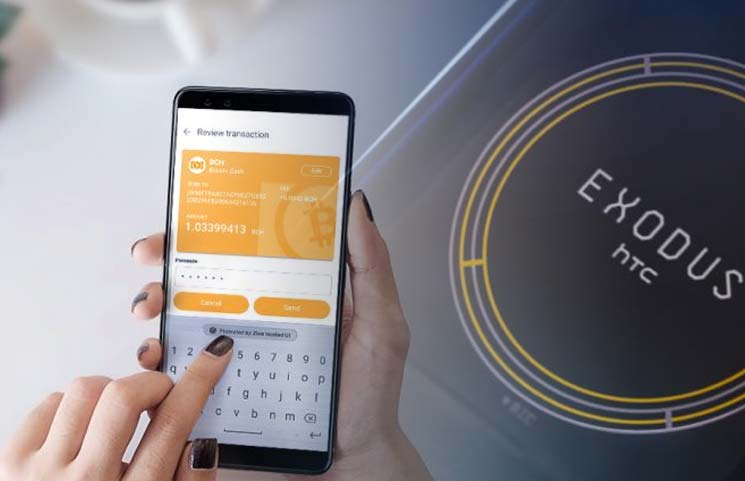 September 10, it became known that the Korean company LG is working on the launch of a smartphone with support for blockchain technology. How many days before this, its main competitor, Samsung, announced the release of its second blockchain phone from the Galaxy line. By the end of this year, several releases of such devices are planned at once, and, the competition involved a variety of companies – from leading manufacturers to startups and even crypto exchanges . What phones can already be bought and which will soon be on sale, Mining-Cryptocurrency.ru understood.

In the mobile device industry, competition for users of decentralized applications and cryptocurrencies is intensifying.

According to the Korean portal Chosun, LG has approved a plan to release a smartphone with support for blockchain functions. The publication added that LG had already conducted market research, and also met with local developers of decentralized applications. And in February this year, the company filed an application with the US Patent Office for the registration of the ThinQ Wallet trademark. Judging by the description, this will be called the future native cryptocurrency wallet from LG with the function of transfers and payments.

LG is no longer new to the crypto industry. Last year, the corporation launched the Monachain blockchain platform. And in July this year, it became known that Monachain will be used to track the supply of meals to South Korean schools. The whole cycle will be monitored – starting from the source of origin of the raw materials and ending with the consumption of products in the educational institution.

South Korea regularly gets into news feeds, as in this country both business, society and the authorities are actively developing the blockchain industry. The LG initiative is a response to the actions of competitors from among Korean companies, namely, the speedy release of the KlaytnPhone blockchain smartphone. Under this name is the Galaxy Note 10 (in the version with 5G), but with a Keystore wallet and support for BApp (blockchain apps). KlaytnPhone is a joint project of two other Korean corporations – Samsung and Kakao. Both companies have many DLT initiatives. The price of the phone starts at $ 1000.

Samsung is actively investing in startups, building a corporate blockchain platform, the company's blockchain solutions are used in the public sphere. But the company's biggest application is the integration of its own Keystore cryptocurrency wallet in the new Galaxy S10 phone, which sales began in February this year. Samsung was the first leading smartphone manufacturer to introduce cryptocurrencies into its devices.

Recently in Keystore, along with ERC20 standard tokens , bitcoin support has finally been added. Now Samsung is releasing the second blockchain smartphone, and a company representative said that support for cryptocurrencies will be transferred to other, more budget models from the Galaxy line.

Kakao is more focused on software development. The company's flagship business is the most popular KakaoTalk messenger in South Korea. In May, Kakao launched its own blockchain platform, Klaytn. In addition, the company plans to introduce a cryptocurrency wallet and a cryptocurrency transfer service in its messenger, similar to Calibra from Facebook.

Taiwanese HTC was the first company to launch a specialized phone for cryptocurrency holders on the market – HTC Exodus 1 was released at the end of October 2018.

The smartphone with a Qualcomm Snapdragon 845 processor runs on Android Oreo OS, has a 6-inch display and two dual cameras. A feature of the phone is the presence of the Secure Enclave security coprocessor, which allows you to hide personal data from the Android OS.

In addition, Exodus provides a mechanism for recovering private keys from crypto-wallets with the help of a seed phrase shared between several authorized users of the user. If a device is stolen, access to wallets can be restored through the combination of phrases. For private keys, storage and cryptocurrency transactions in Exodus, the Zion application is responsible. User keys are stored in the hardware of the phone for greater security.

Following the release, HTC released several updates for its blockchain phone. So, in the spring, Zion added the function of atomic swaps for currencies of the ERC20 standard stored in the wallet. And on September 16, HTC announced the introduction of the Bitcoin․com crypto wallet with support for Bitcoin Cash .

However, HTC decided not to stop on one blockchain phone and intends to introduce Exodus 1S by the end of the third quarter of this year. It is known that the new device will be noticeably cheaper than its predecessor – its price will be $ 250− $ 300.

In addition, a full node of the Bitcoin network can be installed on the smartphone. As planned by the manufacturer, this will enable users, if they wish, to verify the blockchain data themselves. At the same time, this possibility imposes certain technical requirements for the future smartphone – it should have enough memory for a node with a size of 200 GB, which grows annually by 50-60 GB. And this is not counting the space required for the system and programs.

The Finney device also claims to be the first blockchain phone. This smartphone is the development of startup Sirin Labs. In 2017, he raised about $ 157 million in ICOs for Finney, and device sales began late last year.

The device has a 6-inch screen with a resolution of 2160 × 1080, a 12 MP main camera, 128 GB of internal memory and an SD card slot. For the operation of the device, as in Exodus 1, the Qualcomm Snapdragon 845 processor is responsible. The phone’s feature is a built-in hardware wallet with a separate screen and support for dApps.

The device runs on Sirin OS (Android platform). Finney is sold through the official website for as low as $ 990 (purchase is available with Sirin Labs native tokens). The company also has branded stores in several countries, including the United States, Britain, Thailand and Japan.

In general, Sirin Labs business is developing: in March, the company announced the addition of the popular Ethereum wallet MyEtherWallet to the phone , and just a few days ago it confirmed its intention to open an offline store in Bangladesh. However, in April, Sirin Labs laid off a quarter of its employees because of the “difficult market situation” and announced that it would further focus on research and software development.

Another unusual device with blockchain functions was developed by Pundi X, which develops a platform for payments via blockchain . In the winter of 2018, the startup began selling corporate customers its own POS terminal compatible with cryptocurrencies, and according to official figures , it has already sold more than 100,000 units of payment devices. In the autumn of the same year, Pundi X first announced plans to sell its own smartphone and showed its appearance:

The phone has been in development for more than a year, and on September 11, Pundi X introduced new details.

It is curious that it will be possible to attach “modules” to the BOB (included). Apparently, they will only change the appearance without changing the functionality. After attaching all the modules, the BOB will look like this:

It is also known that BOB will run on a Qualcomm Snapdragon 660 processor, and also have a minimum of 6 GB of RAM and 64 GB of physical.

Another newcomer to this segment is the Acute Angle phone, which was created by the Whole Network startup, acquired by the Huobi cryptocurrency exchange . This blockchain phone is perhaps the cheapest among competitors. The retail price of the device will be about $ 515, but it can be significantly reduced if you buy a smartphone for Huobi HT exchange tokens.

It is curious that Huobi is hoping for its community of traders, because it chose a model for distributing the phone through its Prime IEO platform. Those who want to buy a phone will need to take part in a crowdfunding company. Huobi plans to sell no more than 10,000 phones.

Little is known about Acute Angle itself: a 6.7-inch screen, at least 6 GB of RAM and 128 GB of physical memory. In addition, the Huobi trading ecosystem and a certain NODE native loyalty token will be integrated into the phone, which will be used as a reward for certain user actions. In addition, you can separately order a cold NODE wallet, which can be attached to the phone.

Acute Angle sales should begin this week, but so far only in China. In the fourth quarter of this year, the smartphone will be available for purchase in the countries of Southeast Asia, in terms of delivery to the United States and Europe.

Smartphones are the most common type of digital device, so it is not surprising that the blockchain penetrates not only mobile platforms, but also becomes an integral part of the devices themselves. At the very least, phone makers are beginning to take into account the innovations of this technology to increase the security of devices and personal data.

“We think that blockchain phones are a promising area of the crypto industry. As the industry evolves, and innovations such as 5G integrate into our telecommunication systems, we think that the entire crypto community will trade and transfer cryptocurrencies from mobile devices more and more. ”

The possibilities provided by the introduction of the blockchain can be much more than just storing private keys and encrypting personal data. So, the former Coinbase technical director, Balaji Srinivasan, is confident that the deep integration of the blockchain into smartphones will allow to fight against “fraud of the future”, for example, fake calls with requests for transfers when the caller’s voice is generated by the program using AI. Such cases are already happening. To prevent “dipfeyki”, Srinivasan proposed using a two-factor caller identification system, which would use voice recognition technology and cryptographic signature recognition.

Publication date 09/17/2019
Share this material on social networks and leave your opinion in the comments below.