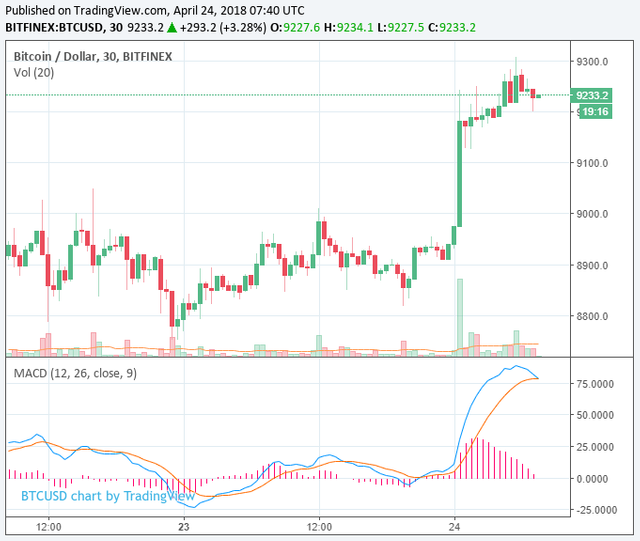 In recent days, the Bitcoin rate has updated a maximum of 2019, and also reached the maximum value in the last 13 months. On Monday, June 17, Bitcoin (BTC) is trading at $ 9161, and the asset capitalization is more than $ 162 billion.

The BTC rally turned out to be so swift that some old-timers of cryptocurrency trading did not even have time to react to it and take profits, as described by well-known crypto enthusiast Michael Nye.

$ BTC pumped while I was sleeping and I missed this opportunity. @cryptochrisw this is for you. 😂 pic.twitter.com/mAUflZGxro

And it was really worth it to hurry: in the afternoon of June 16, Moscow time, Bitcoin experienced a strong correction, falling by 6% in 15 minutes and dropping about $ 200. Trader Alex Kruger commented on this event: “This is what makes Bitcoin trading great”.

As one of the participants in the discussion with Kruger noted , such a correction is another reason to think about entering the market. And indeed, the price of Bitcoin did not fall further, but again rushed to 9.2 thousand dollars, clearly planning to consolidate at a level above 9 thousand dollars.

Tom Lee, the founder of Fundstrat Global Advisors, responded to the growth of the market, saying that all of this indicates that "cryptozyme is over." The next line of resistance is 9.6 thousand dollars.

A step back for Taking, with $ The BTC #bitcoin AT new 2019 highs, do not those old highs look like a few FOMO days away?

Crypto winter is over … pic.twitter.com/1neKiEzaFA

The reasons for the growth of Bitcoin were the news that the Binance cryptobirth significantly tightens trading rules for residents of the United States, the largest cryptocurrency market in the world.

In addition, the hype around Facebook's future steaklkoin aroused interest from new investors in digital assets. As a result, first Bitcoin was revived at the beginning of June 15 and June 16, when some investors began to switch to this cryptocurrency from Altcoins.

Alts and went into $ BTC after @binance was announced. $ BTC was about to dive after 8,3k – Instead we have witnessed a 1.4% rise in BTC-dom!

However, as a result, Bitcoin pulled the majority of altcoins into the “green zone”. This led to the fact that the level of dominance of Bitcoin began to decline from 60% to 57%, and a number of altcoins became the growth leaders in the last 24 hours.

Thus, among digital assets with a capitalization above $ 500 million, EOS was able to outrun Bitcoin in terms of growth rates and eventually went up by 5.2% over the day to $ 7.02 (with Bitcoin, the increase with correction amounted to 5.1%). IOTA added 4.2% and costs $ 0.45.

Publication date 17/06/2019
Share this material on social networks and leave your opinion in the comments below.