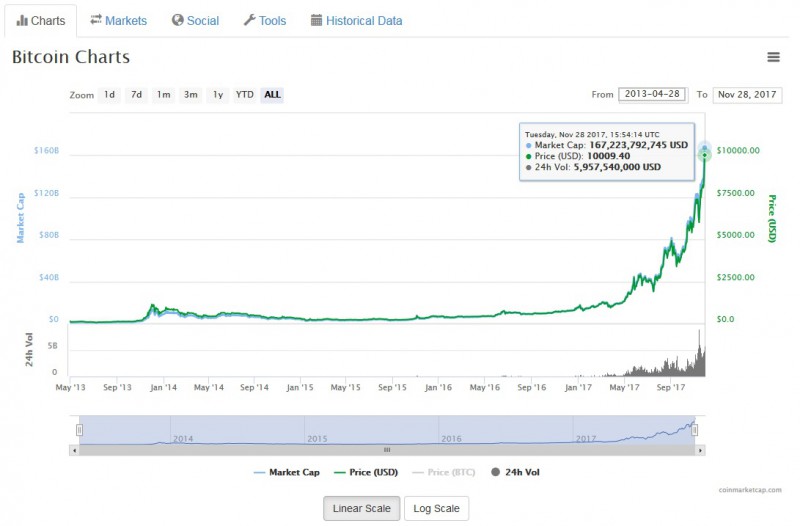 If comparing against daily High vs Low:

This is still bigger than December 2017.

This is the fourth largest daily price movement and the largest since May 10, 2011, said analyst Alex Krueger.

This is also the 54th largest movement when comparing the daily high and low. The last time this was observed on January 14, 2015.

According to Kruger, such a rapid growth is due exclusively to fundamental factors, namely, a statement by Chinese President Xi Jinping, in which he supported the development of the blockchain.

42% outliers don't take place due to technicals. Technicals may help (did so today IMO), but are not the driver.

Coinmetrics founder Nick Carter said closing a $ 10,000 daily candlestick would make it the third most profitable day in Bitcoin history. He recorded the latest such movements in 2010-2011.

visual way of making the same point. this is every 1d return in bitcoin's history. this is really an extraordinary event pic.twitter.com/ZFY3k1SJ8S

Blockchain appeared on the front page of the People’s Daily Chinese newspaper, and some universities in the PRC have already promised to open courses.

12 hours after the major “Xi Pump”

The ripple effect is strong pic.twitter.com/2E2Be6RHol

At the same time, the newspaper does not say anything about cryptocurrencies, nor about bitcoin in particular. Jinping’s blockchain announcement also affected XNET’s share growth of over 100%.

the People's Daily article is ONLY Blockchain, no Bitcoin or crypto as always

and this Chinese blockchain concept stock has pumped over 100% .. $ XNET … The power of Xi Pump: P pic.twitter.com/mjk1SnulXU

According to DataMish , short positions at $ 252.1 million were eliminated at BitMEX.

Amid rising Bakkt, a new daily record was set – 1,179 contracts were traded.

Twitter users have responded to growth with enthusiasm, jokes and memes.

“Remote tweets and charts are all over the place ,” wrote Whale Panda trader, alluding to unlucky analysts.

Thanks @PeterSchiff . Your calls have been absolutely spot on since Bitcoin was $ 17.50. https://t.co/UfhkLqIv1T

“Thank you, Peter Schiff. Your forecasts were correct from the moment when Bitcoin was trading at $ 17.50, ” he laughed at the famous critic of Bitcoin, who this week predicted a fall to $ 2000.

Sincere thanks to Nouriel Roubini, Peter Schiff and Craig Wright for reassuring me not to sell …

“Thanks to Nuriel Roubini, Peter Schiff and Craig Wright for convincing me not to sell.”