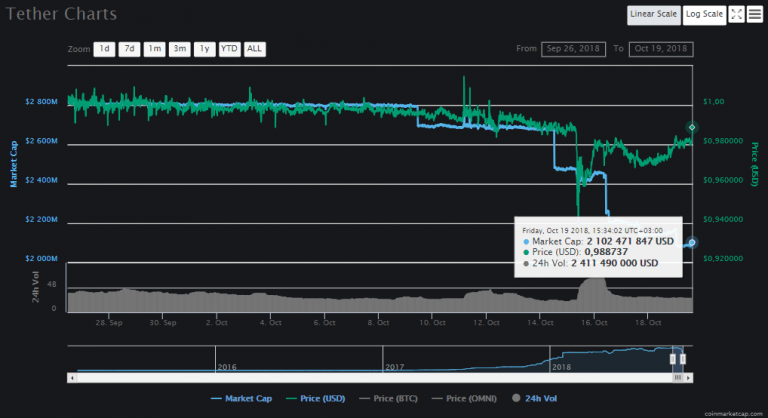 Bitcoin rate on the fifth in terms of trading crypto trading Bitfinex almost reached parity with most other trading platforms.

BitMEX Research analysts, in particular, pay attention to this:

The premium is eroding pic.twitter.com/agw3OmrOp5

The Tether USD stableblock rate, which, according to many, caused an imbalance between the price of Bitcoin on Bitfinex and a number of other exchanges, gradually returns to the target mark of $ 1:

At the same time, over the past few days, the market capitalization of the most popular steablokoin has decreased by about half a billion dollars. This is probably caused by the growth in demand for the new “stable coins” Paxos Standard (PAX), True USD (TUSD), USD Coin (USDC) and Gemini Dollar (GUSD), which are currently trading just above the $ 1 mark.

In the screenshot below, you can see that Bitcoin’s rate on Bitfinex is only about $ 100 higher than on Binance, Huobi and other popular exchanges:

Very interesting is the fact that the tenth place in terms of Bitcoin trading is occupied by the little-known OEX platform, where the first cryptocurrency is traded in tandem with the Chinese yuan (CNY). At the same time, the exchange rate on this exchange is much higher than on the rest.

In terms of the total daily trading volume, this site ranks 16th ($ 116 million) among all exchanges represented on CoinMarketCap, ahead of this indicator, for example, Coinbase Pro ($ 83 million):

Earlier, BlockchainJournal reported that Bitfinex entered into a partnership with the Hong Kong Bank of Communications, and Tether with the Bahamian Deltec Bank.