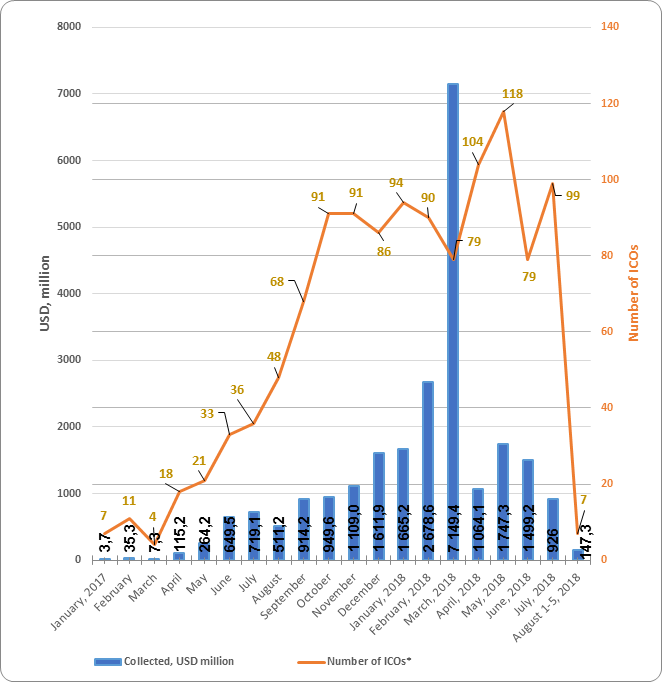 ICObench analysts conducted an analysis of the ICO market in October 2018.

According to the company, the ICO market is still in recession, but there are positive signs.

The proportion of successful ICOs fell from 44% in September to 33% in October. In addition, among the top 5 most ambitious projects, the hardcaps reached only 1 project, one project assembled 1/4 hardkeps, and 2 were moved and 2 failed.

As for the positive signs, the ICO market is becoming increasingly active and mature. In October, the number of ICO projects increased, compared to September 2018 and the same period last year. In October, the projects were collected at 100 million more than in September, the total amount of fees amounted to more than half a billion dollars.

The ICO market is acquiring the characteristics of a mature market. ICO-projects began to attract more consultants. The share of projects with soft- and hardkeps stabilized at the level of 70%, the gap between them decreased to 15 times. He signals a more serious approach to the goals of the projects.

A year ago, the duration of the fundraising campaign averaged 1 month, and over the past 6 months it has increased to 2 months.

TOP-5 ICO by the number of funds raised

The list of countries leading in the number of ICOs remains virtually unchanged. The Top 5 includes countries in whose territory nearly 2/3 of all funds raised were attracted.

In the last 12 months, the most ICO has been in the area of blockchain platforms and cryptocurrencies , the same can be said about the total amount of fees.
However, the leading industries in terms of the average amount raised during ICO funds are banking services and media.