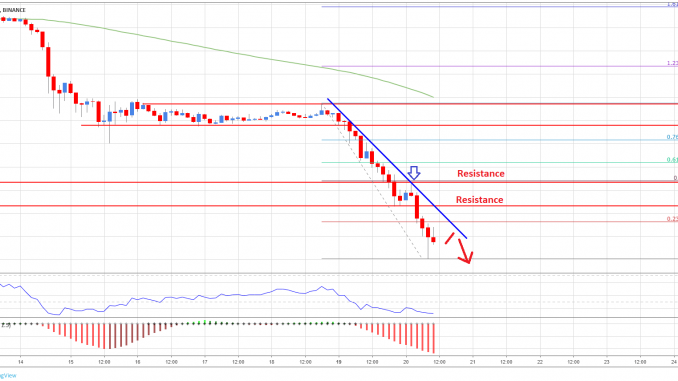 In the next few days, a bitcoin corrective price rally may develop, which, apparently, felt the bottom near the $ 4,000 mark. CoinDesk analyst Omkar Godboul shared this opinion.

The first cryptocurrency , November 20, reached a 14-month low at around $ 4,048 (Bitstamp Exchange). Currently, the "grandfather" is trading just above the $ 4,500 mark. In general, over the past day BTC has grown by about 2%, and in absolute terms, the price has recovered by $ 500.

The relative strength index (RSI) indicates the exit from deep oversold. The last time such low values ​​on the three-day chart were in January 2015.

However, the RSI values ​​are gradually increasing and, most likely, will soon overcome the 30.00 mark. Therefore, a retest of $ 4048 is unlikely in the near future. At the same time, it is possible that the upward correction movement will gradually pick up speed.

On the graph to the left you can see that in January 2015, the price reached the bottom amid the RSI exit from oversold. After that, the confident recovery of Bitcoin began and by the middle of the month the price had reached $ 300.

Currently, the situation is very similar – the RSI is also located at elevations below 30.00. Thus, with the release of the relative strength index from the oversold zone, a breakthrough above the psychological level of $ 5000 is possible.

RSI bullish divergences on lower timeframes indicate that the bears have exhausted near the $ 4,000 mark, as well as the high probability of a confident recovery in price.

On the daily chart, it can be seen that the exponential moving averages (EMA) with periods of 5 and 10 are facing down. This circumstance may somewhat restrain the upward correctional movement.

On the other hand, if the corrective rally intensifies and the mark of $ 5242, through which the EMA 10 passes, will be behind, then we can talk about a radical change in market sentiment.

Recall that last week Omkar Godboul correctly noted that support for $ 5,000 could not stand, and the probability of an increase in the price of BTC is extremely low.