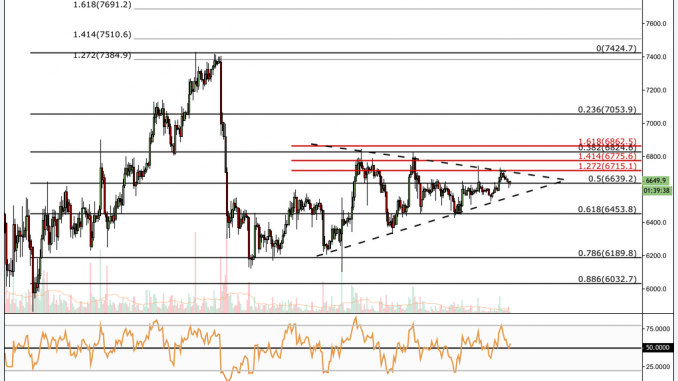 The cryptocurrency market is still subject to the influence of short-term volatility surges, but at the moment consolidation is worsening. Exit from the local range may “stumble” on the border of the mid-term outset. And only a breakthrough of the key levels of support or resistance will show the real moods of the participants of the crypto market.

A further RoboForex analyst Dmitry Gurkovsky will tell about further possible scenarios for the price movement of several popular altcoins.

On the hourly timeframe it is clear that consolidation continues. The short-term situation demonstrates the completion of a local downtrend by the breakdown of the resistance line. New growth momentum may be aimed at the current resistance level – $ 448.11.

Golden crosses on the MACD and Stochastic indicators act as confirming factors. In the future, the breakdown of the current resistance level may open the way for quotes to the resistance of the emerging growth channel – the level of $ 461.40.

In addition, it is necessary to consider the possibility of reducing. The current support level is around $ 436.33. Its breakdown can be a signal of the development of a downward trend to the level of support at $ 424.10.

The current EOS dynamics on the hourly timeframe demonstrates the continuation of the development of the downward trend. However, its angle of inclination is so small that its scale can be neglected and called “sideways”.

It is also worth noting that the market has overcome the line of support for the medium-term correction trend. Now the price is trying to gain a foothold on the achieved levels, however, an upward movement is not excluded. This is indicated by the dynamics of the MACD and Stochastic indicator lines.

Thus, it can be assumed that the target of growth may be the area of ​​resistance of about $ 5.61. Taking into account the movement in the side, we can expect a rebound from the resistance and a decline to the level of support by $ 5.29.

In addition, it is necessary to consider the option to exit from the sideways up to the level of $ 5.92. Since the market is still in a state of medium-term “turbulence,” this may cause short-term spikes in volatility.

On the Ethereum hourly chart, we can see that after the breakdown of the support line of the consolidation corridor, the cryptocurrency developed a downtrend, but did not reach local minima. Thus, the development of the downtrend may be completed soon. In addition, the increase in significant minima indicates the formation of an uptrend. The indicators of MACD and Stochastic indicators serve as confirmation of the growth hypothesis.

A signal for further growth will be the breakdown of the current local resistance level – $ 202.90. Growth targets are located at $ 204 and $ 206.30, which are in the area of ​​resistance of the long-term downtrend. It is necessary to take into account that the possibility of rebound from the level of $ 204 will allow quotes to return to the frames of the downward corridor and local support at $ 198.20, and then to the level of support of the downward channel at the mark of $ 193.30.

The hourly chart of Litecoin demonstrates the continuation of the development of a narrowing corridor. The result of such dynamics will be the output in any of the directions, since the chances for both options are equal.

The current resistance level is $ 52.64. Its breakdown will allow quotes to rise to the level of $ 53.60. The dynamics of the MACD and Stochastic indicator lines indicate the development of the upward movement.

But to exclude the option of breaking the current support at $ 51.32 is impossible. Its overcoming will open the way for quotes to the line of support for a potential channel of downward movement – the mark of $ 49.66.

XRP on the hourly chart demonstrates the breakdown of the support line of the medium-term growth channel, which may indicate the formation of a new medium-term downtrend. The short-term downward trend ended with the formation of convergence on the MACD and Stochastic indicators and the breakdown of the channel resistance line. The growth impulse is directed to the resistance of the upper projection corridor and, at the same time, to the overcome support line for additional testing at $ 0.4749.

Its breakdown will allow the price to develop an upward movement to the level of $ 0.4925. Support for the current dynamics refuses level of $ 0.4479. Overcoming it will mean a further decline with the immediate goal at $ 0.4183.