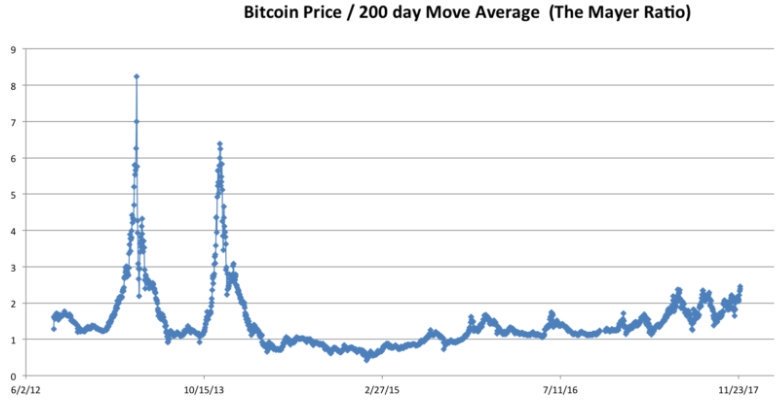 Over the past few years, traders and cryptocurrency researchers have created several excellent indicators to help predict long-term market trends. These tools are based on such fundamental indicators as price, transaction volume, market capitalization, realized value, UTXO (exits of unspent transactions), etc.

We offer to get acquainted with another popular indicator – Mayer Multiple, created by the investor and the leading Bitcoin Knowledge podcast Trace Mayer . As the basis of the material on display is taken article analyst Sam CoinDesk Uimeta.

In the volatile market, cryptocurrency is almost impossible to accurately determine the price bottom or top, followed by a sharp reversal. So, at the end of 2017, Bitcoin came close to the $ 20,000 mark, after which a sharp and deep fall began. Then many inexperienced and overly optimistic investors "caught knives" – increased their long positions, mistakenly believing that the collapse taking place in the market is only a short-term price out of strong overbought, and not a reversal of the long-term trend.

Nevertheless, some traders and market analysts are confident that, thanks to the relatively new metric – Mayer Multiple – it is possible to identify both speculative bubbles and moments of bearish exhaustion. The tool is available on the Willy Woo independent cryptanalytic web resource .

The indicator is based on the following formula :

According to the canons of technical analysis, usually if the price is above the long-term MA, then buyers prevail in the market, if lower – sellers dominate.
However, all is not so clear.

The Mayer Multiple essentially shows the gaps between the price value and the MA 200. These gaps help to identify on the chart speculative bubbles and periods of complete exhaustion of sellers, which signify a long-term trend reversal upwards.

If you compare the indicator values below 1 with the price, it becomes obvious that Mayer Multiple correctly indicates bearish moods. On the other hand, the indicator marks above 1 indicate the predominance of buyers in the market.

Historically proven: Mayer Multiple values above 2.4 indicate the development of a speculative bubble. Mayer himself believes that investors achieve the best long-term results if the main period of cryptocurrency accumulation falls on the indicator values below 2.4.

On the graph you can see that Mayer Multiple never fell below the value of 0.237. This mark was reached at the end of 2011 and marks the bottom of the first bear market in the history of Bitcoin.

As the data show, at present the price of the first cryptocurrency is close to the lowest possible levels of oversold. Consequently, the bottom will be reached in the near future. However, the price still has room to fall below, taking away, respectively, the indicator indicator from the MA 200, which currently runs at $ 5,200.

On the other hand, the bull market is likely to come if the price consolidates above the MA 200. At this time, the Mayer Multiple values will be above the 1 mark.

Let's start with Bitcoin Network Momentum. The graph below shows that its values have not yet reached the level of 2016-2017, when a powerful bull rally took place:

Nevertheless, despite the development of off-line solutions, like Liquid or Lightning Network , the volume of on-line transactions is gradually increasing . Now it is about the same level as in November 2017, when the price of Bitcoin went right through to unprecedented heights.

The current value of the MVRV indicator is 0.874. In December, amid the fall of Bitcoin in the $ 3,100 area, the MVRV Ratio dropped to 0.7, which is a three-year minimum.

Now the values of this indicator are rising, approaching the equilibrium mark of 1, at which bitcoin is neither overvalued nor underestimated by the market. This indicates a bitcoin exit from deep oversold and the beginning of a gradual recovery of its price and the market as a whole.

In addition to the above-mentioned fundamental indicators, it is worth noting that in recent times the volume of exchange trading has increased significantly, which are already approaching the values of the beginning of 2018, when the market capitalization was at peak levels.

Also this month , a record trading volume of bitcoin futures was recorded on the major American stock exchange CME.

In bitcoin price Surge Leads to record $ The BTC futures volume on February 19, with over 18K contracts traded. https://t.co/X3zW4D861Y pic.twitter.com/Qldb1jaVgw

Against the backdrop of a sharp revival of “whales” on the Chicago Mercantile Exchange, the number of long positions on Bitfinex reached an 11-month high.

Thus, many metrics indicate that the market is not at all the same as, say, six months ago: there are no obvious decadent moods, there is a revival both in the graphs and in the media space.

Perhaps the coming rally will not be as dizzy as in 2017. However, now is probably the right time to fasten your seat belts.

Publication date 25.02.2019
Share this material on social networks and leave your opinion in the comments below.